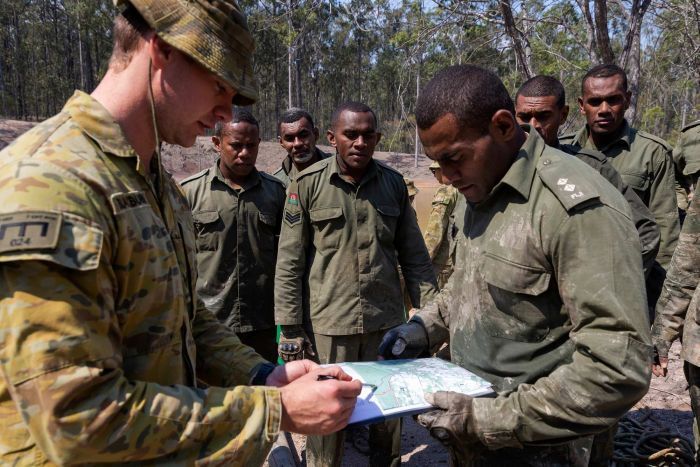 Australian and Fijian troops will be jointly deployed on a UN peacekeeping mission in the Middle East within weeks.

It marks the growing closeness of the two countries’ military ties, with Prime Minister Scott Morrison pushing for closer co-operation during his visit to Fiji this week.

The Australian and Fijian troops will be co-deployed to the Golan Heights, the UN-controlled territory bordering Israel and Syria.

Both countries have had troops involved in the long-running UN mission established after the 1973 Arab-Israeli War, but not operating as a joint unit.

Mr Morrison spoke to some of the Australian Defence Force (ADF) personnel who will take part in the joint deployment whilst watching a rugby league match in Fiji.

“I just met some of the boys … who are going to be deploying with the Fijians over in Syria and they’re going to be going over together next week,” he said afterwards.

“Our Australians are going over there, training them, supporting them in what they’re doing in the field.”

The deployment is unrelated to the current unrest in north-east Syria.

Mr Morrison will visit the Fijian military’s Blackrock Camp on Saturday, which Australia is rebuilding after securing the construction work ahead of China’s bid last year.

It is intended to be a hub for police, peacekeeping and natural disaster response training for Fiji and, eventually, other Pacific countries, too.

“I’d like to see out two forces do more together,” Mr Morrison said in a statement.

“We are living in a world of transition where shifting power dynamics is taking place, which means our friendship and partnership with countries like Fiji, in our own backyard, is even more important.”

Work is to be completed by the end of 2020 and when finished, the Blackrock Camp will train around 500 military personnel and police officers each year.

Mr Morrison’s visit to Fiji has so far focused on diplomacy through sport, with the Prime Minister’s XIII men’s and women’s rugby league teams taking on the Fijian national sides on Friday night.

The self-confessed rugby league tragic took the opportunity to run water to the players and take selfies with them, as both the men and women dominated their matches.

The crowd was enthusiastic, but smaller than expected at around 3,000 people, with the Rugby World Cup garnering more attention in Fiji.

Mr Morrison praised the players for their role in Australia’s sports diplomacy, which aims to bring Australians and Islanders closer together.

“You’re doing it as an important cause for our country,” he told players pre-match in the men’s changerooms. “Our relationship with the Pacific is so important.”

Some of the players had visited villages to promote campaigns aimed at stopping violence towards women and children.

“You carry that message far better, frankly, than politicians can,” Mr Morrison said.

Climate change, which has proven to be a thorny issue between the two countries, was not discussed in the meeting.