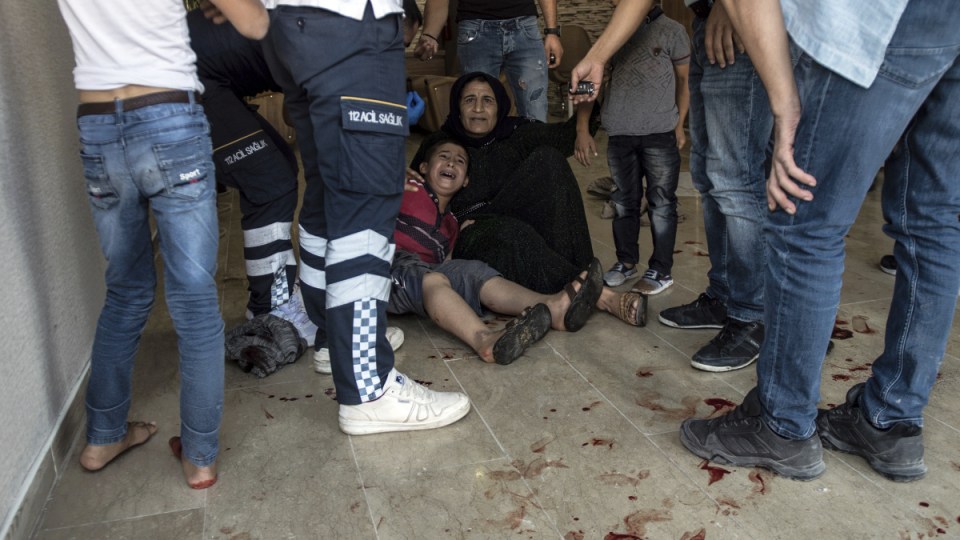 More than 60,000 people – most of whom have nowhere to go – have fled for their lives as a Turkish offensive against Kurdish fighters in northern Syria entered its second day.

The death toll has risen to more than 100 as the military action escalates, including a nine-month-old baby, three girls under 15 and tens of Kurdish fighters.

It comes as President Recep Tayyip Erdoğan threatened European leaders to tone down their criticism of the offensive or Turkey would send millions of migrants up to their countries.

The offensive is expected to displace hundreds of thousands of people.

“Since Wednesday, more than 60,000 people fled border areas,” the Syrian Observatory for Human Rights said, adding that most of the displaced travelled east towards the city of Hasakeh.

Rami Abdel Rahman, the head of the Britain-based monitor, said the biggest displacement was from the border areas of Ras al-Ain, Tal Abyad and Derbasiyeh.

The International Rescue Committee is expecting the number to sky-rocket in the coming days as Turkish troops continue their air and ground assault on Kurdish groups.

“If the offensive continues it’s possible a total of 300,000 people could be displaced to already overstretched camps and towns still recovering from the fight against ISIS,” said Misty Buswell, IRC’s communications director for the Middle East.

At least 100 have already been killed in the conflict, including a nine-month-old baby who was slain by mortar and rocket fire from Syria into Turkish border towns, according to Turkish provincial authorities.

In a statement, the Turkish government labelled the infant a “martyr” of it’s offensive.

“The first martyrs of Operation Peace Spring were a nine-month-old Syrian baby, Mohammad Omar, and Cihan Gunes, a civil servant working for the tax office in Akcakale,” the Sanliurfa governor’s office said in a statement.

In a joint statement, fourteen aid agencies called for “urgent action” to prevent further deterioration of the humanitarian situation.

“An estimated 450,000 people live within 5 kilometres of the Syria-Turkey border and are at risk if all sides do not exercise maximum restraint and prioritise the protection of civilians,” the statement, which included Oxfam and World Vision among its signatories, read.

They describe the situation as fragile, saying: “All children must be protected and provided humanitarian assistance, and countries of origin must take immediate steps to repatriate the estimated 9,000 children from at least 40 different nationalities who are in north-east Syria.”

Despite widespread international warnings, Turkey had conducted 181 airstrikes by Thursday evening, saying it wants to create a “safe zone” cleared of Kurdish militias which will also house some of the millions of Syrian refugees it hosts.

During a combative speech at a meeting of lawmakers from his party on Friday, President Erdoğan threatened to send “millions” of Syrian refugees to Europe if EU leaders didn’t stop calling it an ‘invasion’.

“Hey EU, wake up. I say it again: if you try to frame our operation there as an invasion, our task is simple: we will open the doors and send 3.6 million migrants to you,” he said.

Turkey currently hosts 3.6 million refugees – the highest in the world – displaced form the last eight-years of conflict in Syria.

Turkey agreed to prevent refugees from leaving towards Europe in exchange for six billion euros and visa-free travel for its own citizens, under a 2016 agreement with the EU.

It has frequently criticised Brussels for being slow in providing the money.

The attacks on the Kurds were instigated after President Donald Trump announced he would pull US troops out of the region, something Kurdish allies described as a “stab in the back”.

Mr Trump’s decision to abandon the area has also drawn bipartisan condemnation within the US.

On Thursday, Mr Trump defended his decision to withdraw troops because the Kurds didn’t fight alongside the US in the second world war.

In a staggering comment, the president said the Kurds “didn’t help us in the second world war, they didn’t help us with Normandy as an example – they mention the names of different battles, they weren’t there.”

For nearly the last five years Kurdish forces fought alongside the US against the Islamic State, losing roughly 11,000 fighters.

There are growing concerns that the conflict will result in thousands of hardcore ISIS fighters currently held in Kurdish detention escaping as the Kurdish forces struggle to fight off the encroaching Turkish army.

The Kurds are holding 10,000 ISIS members including some 2000 foreigners.

Initially, Trump said before Turkey began its attacks that it would be responsible for all the ISIS fighters in the area but it is unclear how that would be implemented.

Infant among the dead as Turkey drops 181 bombs in Syria