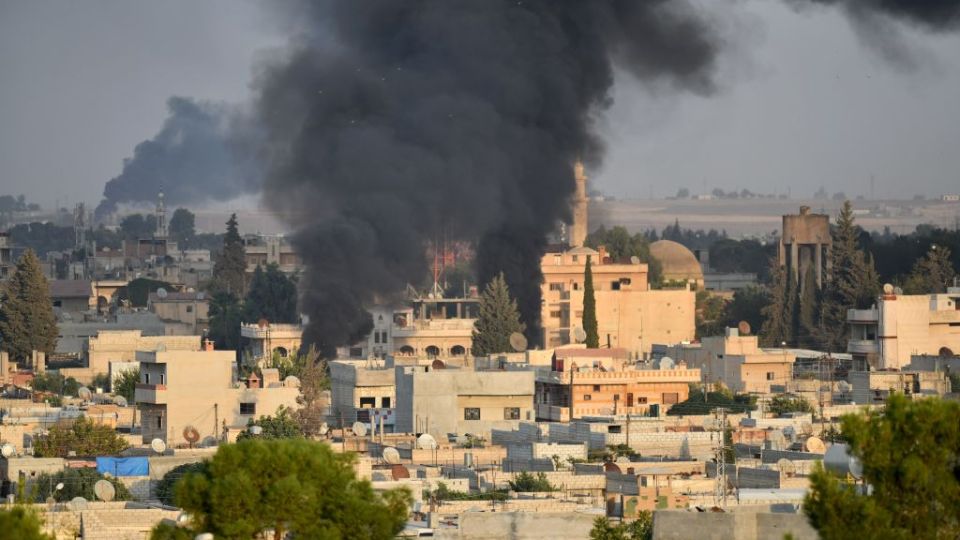 Three dual nationals in Syria have been stripped of their Australian citizenship, as a Turkish military offensive threatens to bring the country to its knees. Photo: Getty

Civilians are fleeing for their lives as Turkey launched air strikes in northern Syria, just days after the US announced a troop withdrawal.

Warplanes and artillery are targeting Kurdish militia positions in the border region between the two countries as Turkey declared its mission to prevent the creation of a “terror corridor”.

Five civilians and three fighters have been reported dead by the Kurdish-led Syrian Democratic Forces as the attacks caused gridlock and chaos with people fleeing for safety, and reports of some artillery shelling near homes.

Turkish ground forces have also entered the region in a land offensive, according to the Turkish defence ministry, as part of Operation Peace Spring.

Turkish president Recep Tayyip Erdogan announced the military offensive in a Twitter post, saying the army action was designed to create a “safe zone” on his country’s southern border.

Turkey had been poised to enter northeast Syria since US troops, who have been fighting with Kurdish-led forces against Islamic State, started to leave in an abrupt policy shift by president Donald Trump.

The US withdrawal was criticised in Washington as a betrayal of America’s Kurdish allies while Kurdish-led forces denounced the policy shift as a “stab in the back”.

Mr Trump, whose decision to pull troops from the Kurdish stronghold paved the way for Turkey’s invasion, said the military move was a “bad idea”.

“The United States does not endorse this attack and has made it clear to Turkey that this operation is a bad idea,” the statement said.

“Turkey has committed to protecting civilians, protecting religious minorities, including Christians, and ensuring no humanitarian crisis takes place—and we will hold them to this commitment.”

The US president tweeted he did not want Americans to be part of “stupid endless wars” in the Middle East.

Fighting between various groups that has been going on for hundreds of years. USA should never have been in Middle East. Moved our 50 soldiers out. Turkey MUST take over captured ISIS fighters that Europe refused to have returned. The stupid endless wars, for us, are ending! https://t.co/Fbcem9i55Z

The assault on the Kurds – for years Washington’s main allies on the ground in Syria – is potentially one of the biggest shifts in years in an eight-year war that has drawn in global and regional powers.

The Kurds played a leading role in capturing territory from Islamic State, and now hold the largest swathe of Syria outside of Bashar al-Assad’s government’s hands.

Australia has expressed “deep and profound” concerns about Turkey launching a military incursion into Syria.

But senior federal government minister Greg Hunt has been careful not to comment on whether the Turkish offensive into Syria could spawn a potential return of Islamic State.

“We have deep and profound concerns,” Mr Hunt told ABC Radio on Thursday.

Mr Juncker said the bloc would not fund Ankara’s plans in the region.

“If the plan involves the creation of a so-called safe zone, don’t expect the EU to pay for any of it,” he told the EU parliament.

The artillery strikes, which also targeted YPG gun and sniper positions, were aimed at sites far from residential areas, the source said.

A Reuters cameraman in the Turkish town of Akcakale saw several explosions across the border in the Syrian town of Tel Abyad, where a witness reported people fleeing en masse.

The sound of planes could he heard above and smoke was rising from buildings in Ras al Ain, he said.

The SDF said military positions and civilians in the city of Qamishli and the town of Ain Issa – more than 30km inside Syria – had been hit, and said there were initial reports of civilian casualties.

Turkish media said mortar and rocket fire from Syria struck the Turkish border towns of Ceylanpinar and Nusaybin. There were no immediate reports of casualties there.