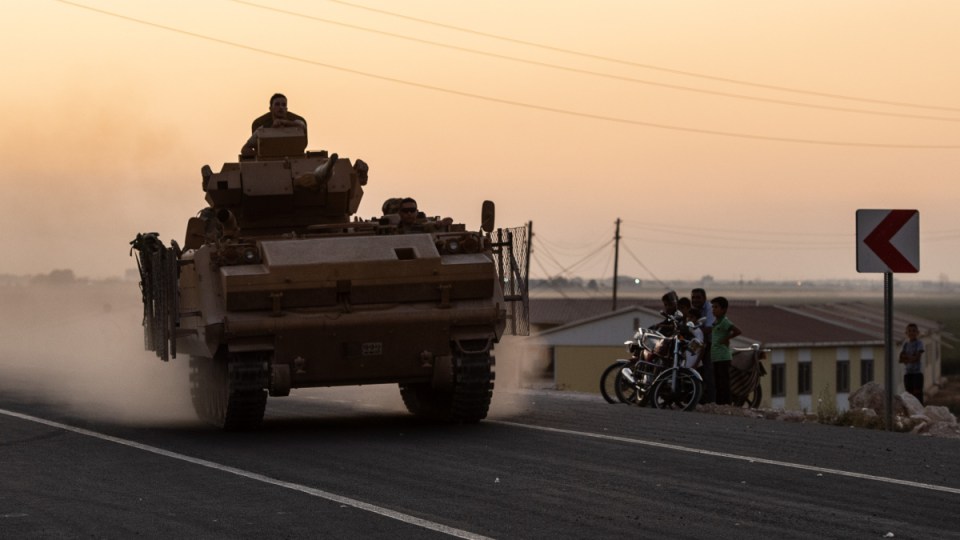 A Turkish armored vehicle prepare to cross the border into Syria.

But the Prime Minister has absolved US President Donald Trump of criticism for green-lighting the invasion by withdrawing US forces ahead of military strikes, arguing Mr Trump had previously flagged his intentions.

Over 66 Australian women and children who freely joined Islamic State or were tricked into entering the country by their husbands and parents are caught up in the unfolding crisis as they remain in refugee camps in northern Syria.

They include Zehra Duman, an accused ISIS recruiter who fled Australia when she was 19. She is in a refugee camp with her children, Jarrad and Layla.

Ms Duhman’s lawyers are seeking clarification from authorities if her children’s right to claim citizenship has been extinguished because they were born shortly after the Australian government secretly stripped her of citizenship.

There are also 14 men in Kurdish-controlled prisons, including – as The New Daily also revealed this week – an intellectually disabled 16-year-old boy who is alone in an adult prison. He was taken to the region when he was 11.

“We are concerned about what we’re seeing, of the actions of the Turkish government moving into Syria, and what that could mean for the safety of the people in that area,” Mr Morrison said on Thursday.

“We are also very concerned about what this could mean for the potential resurgence of Daesh [Islamic State] and we will be working through all diplomatic channels, working with our colleagues, whether in Europe or the United States or elsewhere, where we have been in partnership in the Middle East for some time, to closely monitor these developments.”

But Mr Morrison said it was a matter for Turkey.

“The decision of the United States is a matter for them,” he said.

“It’s a sovereign decision of the United States. It’s not for me to run a commentary.

“As I said yesterday, it’s just a simple statement of fact, not a statement of commentary, that this decision is consistent with statements that the President has been making for some time,” Mr Morrison said.

“That is what we have expressed directly to our partners and our allies and certainly to the Turkish government.”

The offensive comes as Mr Trump attempted to justify abandoning the local Kurdish population by referencing an article written by conservative Kurt Schlichter for Townhall.

“This risks destabilising the region, exacerbating humanitarian suffering, and undermining the progress made against Daesh, which should be our collective focus,” Mr Raab said.

Australia has ‘deep concerns’ about Syria