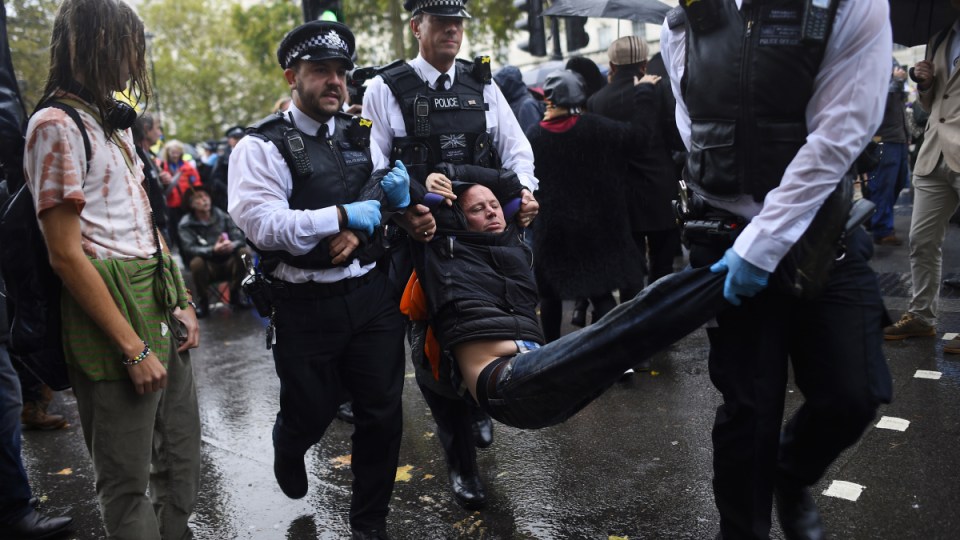 Over 200 people were arrested in London. Photo: Getty

Extinction Rebellion protesters in London have glued themselves to buildings after being warned they face arrest on the second day of their international action.

Climate change activists camped overnight to maintain their stronghold on parts of central London, telling authorities they were prepared to be taken into custody for failing to comply with orders to move their protest to a single site at the iconic Trafalgar Square.

The city’s Metropolitan Police said on Tuesday evening they had arrested 212 people, adding to another 319 people on Monday, well over the 122 arrests made on the first day of similar protests last April.

It brings the total number arrested so far to 531.

Police handed out notices across Westminster on Tuesday morning, where campaigners kept an overnight vigil, in an attempt to reduce the disruption in the capital and concentrate the action on one area.

However, protesters glued themselves to the Department for Transport building and to the underside of a lorry outside the Home Office in defiance of the notices.

In a statement on Tuesday afternoon, the Met said any group wishing to continue with their Extinction Rebellion protest “must” go to Trafalgar Square. It came as UK Prime Minister Boris Johnson described activists as “unco-operative crusties”.

Former Metropolitan Police detective sergeant John Curran, 49, who camped overnight at the protests, said he was willing to be arrested again after being detained by officers during the first round of action in April.Mr Curran, father to a three-year-old daughter and now makes guitars for a living in Oxford, said: “I am willing to be arrested again unless some changes happen.”

An Extinction Rebellion lorry, parked outside the Home Office, became a focal point for some activists who glued themselves underneath the vehicle while several hundred protesters spent Tuesday sat on either side of the police blockade at the building.

Many said they were prepared to stay in their makeshift camp.

Activist Mike Gumn, 33, from Bristol, camped overnight wearing a suit and a flat cap to show the protest “is for everyone”.

Mr Gumn, an National Health Service manager who has children aged two and three, said: “I have a job, I have taken annual leave to be here.

“I want to make a statement that (the activists) are all different sorts of people from all different walks of life, not just people you would call hippies.”

Further disruption is expected throughout the week.

Over 200 arrested in Extinction Rebellion protests in London