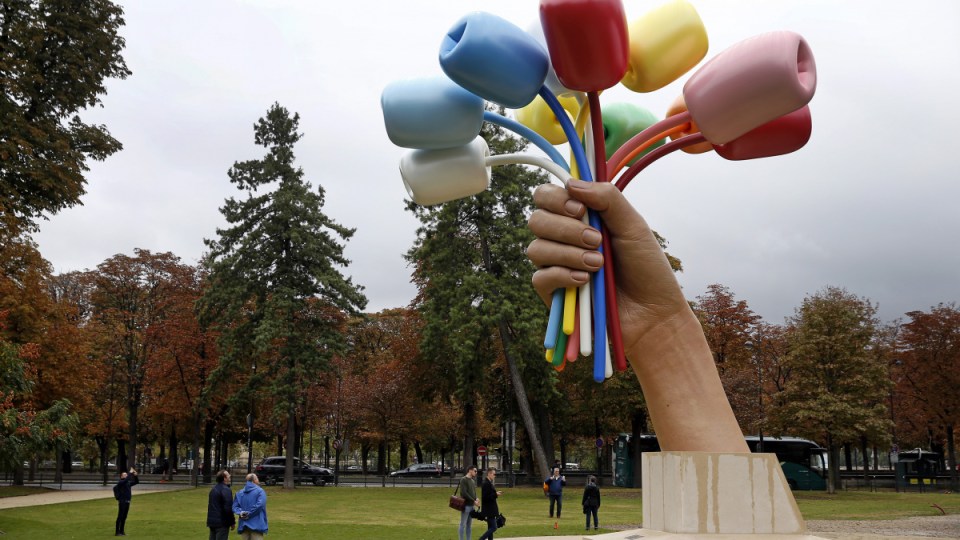 The sculpture was given to the city of Paris as a tribute to the victims of the 2015 terror attacks. Photo: Getty

A large tulip sculpture given to the city of Paris as a tribute to the victims of the 2015 terror attacks has been mocked as ‘pornographic’ and ‘like marshmallows’.

The Bouquet of Tulips, which was a gift to the city from New York-based pop artist Jeff Koons, was unveiled on Friday in the gardens of the Champs Élysées — between the Petit Palais and Place de la Concorde.

Onlookers cheered and applauded as a huge white sheet was lifted to reveal the 12.6-meter sculpture, made in the artist’s iconic kitsch style, which signifies US solidarity with the French people.

Koons is a controversial figure who holds the record price for a living artists work for his 1986 Rabbit, a stainless-steel sculpture of a rabbit that fetched more than $US91 million ($131 million) in May.

The wider reception to his latest unveiling has not been so kind.

Philosopher Yves Michaud slammed the sculpture in France’s L’Obs magazine, writing that it looked like “eleven coloured anuses mounted on stems,” and that it was “in fact a pornographic sculpture”.

One Twitter user said that Parisians would “now think that tulips are large coloured marshmallows”.

While another, Gilles Brandet, said the sculptor’s work was “eye-candy for philistines,” adding: “I find Jeff Koons’ ‘kitsch neo-pop’ totally devoid of interest.”

Columnist Eric Naulleau, who earlier criticised Koons for “imposing his poor bouquet of tulips” on Paris, said on Monday the artwork was “dreadful.”

Previously, a survey of readers, gallery owners, and collectors run by Le Quotidien de l’Art showed that 98 per cent disapproved of the project.

But it received some support. Over social media, others said they thought it was “pretty” and “a gift from the heat.”

One Australian, 19-year-old Emma Grace Parkinson from Hobart, was wounded in the attack.

Unveiling the sculpture, Koons said: ‘I did, as a citizen in New York, experience 9/11 and the depression that hung over the city. It really took years for the city to be able to come to life again.”

The artist said that 80 per cent of the proceeds gained from selling the copyright of the artwork would go to the victim’s families while the remaining 20 per cent would be dedicated to its maintenance.

Patricia Correia, who lost her daughter in the attack at Bataclan concert hall, told the Associated Press that it was “a very strong testament” to France’s relationship with the US, adding “for me, it represents the colours of life”.