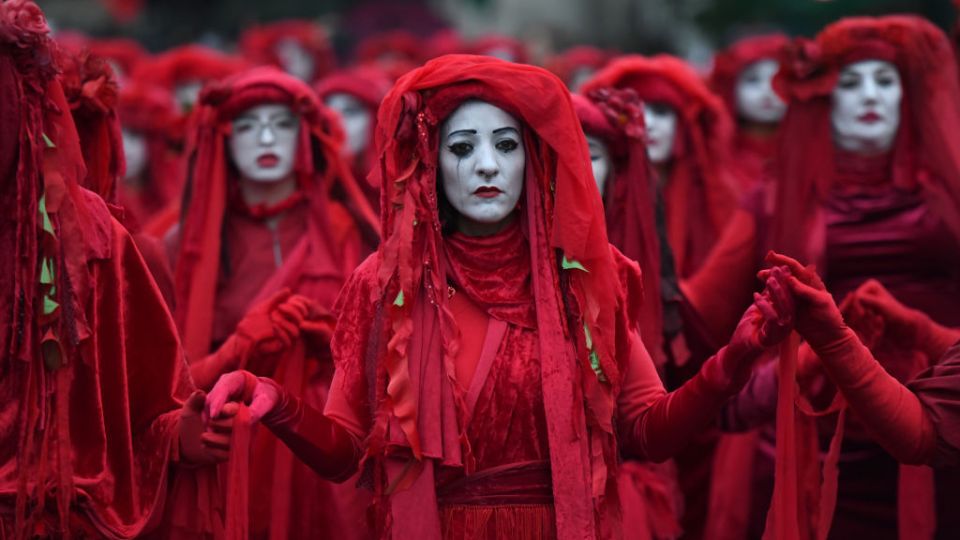 Extinction Rebellion protests, such as the Red Brigade of The Invisible Circus in London, are causing chaos are around the world. Photo: Getty

Hundreds of climate change protesters have been detained by police in major cities around the world, which activist group Extinction Rebellion said was the first day of a two-week-long campaign.

Many of the protests targeted major road junctions near government offices, in disruption that was tolerated to varying degrees by police in different countries.

London Metropolitan police arrested 276 people in various parts of the capital as thousands of activists blocked several main roads and at least one bridge.

Activists succeeded in bringing the area to a standstill with roadblocks on Westminster and Lambeth Bridges, Victoria Street, Whitehall, Horse Guards Road and the Mall.

Parliament Square was empty of traffic except for police vans, bicycles and rickshaws carrying tourists, while costumed protesters walked up Whitehall, and a hearse was used to block the road at Trafalgar Square.

“People are rebelling in these numbers because they realise the time to address this is right now, not in 2050, or even 2025,” Extinction Rebellion UK tweeted, referring to “net zero” climate emissions pledges by some governments.

Extinction Rebellion says the protests could be as much as five times bigger than those held in April, which brought major disruption to London and saw more than 1,100 arrests.

The “international rebellion” was co-ordinated around the world, with action taking place in cities including Berlin, Madrid, Amsterdam and New York.

Hundreds of environmental activists took part in protests through Ireland’s capital Dublin as part the action, with a mock funeral procession though the city and a large pink boat unveiled outside the heart of the Irish parliament in Leinster House.

In Berlin, around 1,000 people blocked the Grosser Stern, a traffic circle in the middle of the German capital’s Tiergarten park dominated by the landmark Victory Column.

Demonstrators set up a tent camp outside Chancellor Angela Merkel’s office to prepare for the protests, reflecting dissatisfaction with a climate policy package drawn up last month by her government.

In Amsterdam, hundreds of demonstrators blocked a major road outside the Rijksmuseum, one of the city’s most popular tourist attractions, and set up tents.

The protest went ahead despite a city ban on activists gathering on the road. The protesters ignored police calls for them to move to a nearby square.

In Spain, a few dozen activists briefly chained themselves to each other and to an elevated road over a major artery in the capital Madrid, snarling traffic during the morning rush hour.

The National Police said 33 activists were taken to their premises and three were arrested for resisting orders by anti-riot officers.

A few hundred other protesters camped out in 40 tents at the gates of Spain’s Ministry of Ecological Transition.

Around 1,000 protesters blocked the area around Chatelet in central Paris and vowed to stay at least the night in the makeshift camp they had pitched.