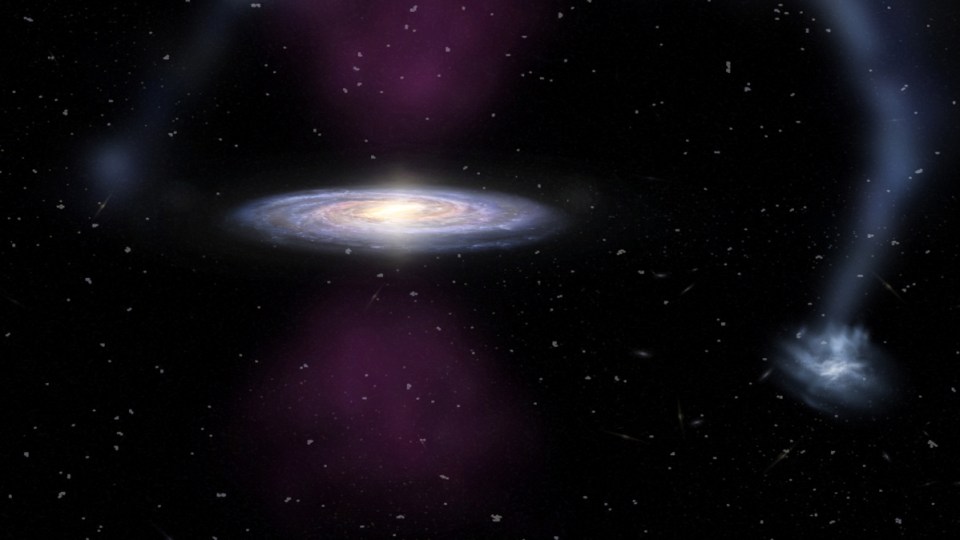 Artist impression of a giant flare beaming out of the the Milky Way after an explosion most likely caused by the black hole at the centre of our galaxy. Photo: James Josephides/ASTRO 3D

A cataclysmic explosion at the centre of our galaxy created blasts that lasted for 300,000 years, travelling outwards in expanding cones of radiation, a team led by Australian researchers has discovered.

The “titantic” event happened as recently as 3.5 million years ago when humans’ ape-like ancestors were walking upright in Africa – which is very recent in galactic terms.

The finding has changed the way scientists view the Milky Way which was originally thought to be an inactive galaxy and has opened the possibility of a rethink of its evolution and nature.

“The flare event that occurred three million years ago was so powerful that it had consequences on the surrounding of our galaxy,” said Magda Guglielmo, an author of the paper from the University of Sydney.

“We are the witness to the awakening of the sleeping beauty.”

Added author Lisa Kew: “This shows that the center of the Milky Way is a much more dynamic place than we had previously thought. It is lucky we’re not residing there!”

The explosion, known as a Seyfert flare, originated near the super-massive black hole at the centre of our Milky Way and created rays of energy that shone outwards from both poles through intergalactic space.

“The flare must have been a bit like a lighthouse beam,” said Joss Bland-Hawthorn, from the University of Sydney, who led the team of international scientists.

“Imagine darkness, and then someone switches on a lighthouse beacon for a brief period of time.”

The discovery was made by scientists collaborating at Astro 3D – the ARC Centre of Excellence for All Sky Astrophysics in 3D which unlocks the mysteries of the universe using 3D technology.

The flare’s effects were felt as far away as the Magellanic Stream—a long ribbon of gas stretching nearly halfway around the Milky Way about 200,000 light-years away from the black hole named Sagittarius A.

The team used data collected by the Hubble Space Telescope to build upon and reinforce previous their findings.

The work will be published in The Astrophysical Journal.