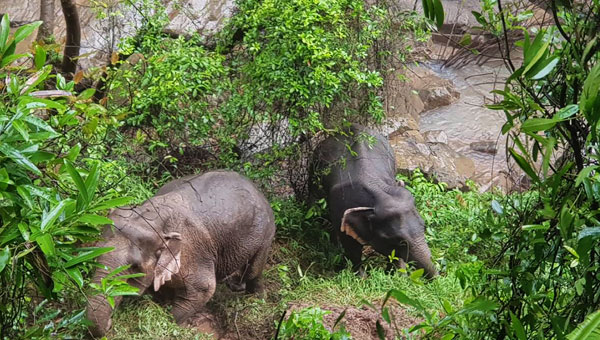 Fears are held for the safety of the two surviving elephants. Photo: AAP

Six wild elephants have died trying to save each other after falling into a waterfall at the Khao Yai National Park in Thailand.

Officials said the incident occurred after a baby elephant slipped over the Haew Narok Waterfall in the north-eastern province of Nakhon Ratchasima.

Two other elephants were also found struggling on a cliff edge nearby, and have been moved by Thai authorities.

“It was an accident. We have often seen this happening,” National Resources and Environment Minister Varawut Silpa-archa told Reuters.

Edwin Wiek, the founder of Wildlife Friends Foundation Thailand, told the BBC surviving elephants may be in danger as elephants rely on their large herds for protection and finding food.

The incident could also take an emotional toll. Elephants have been known to display signs of grief.

Six wild elephants found dead at "Haew Narok Waterfall" in Thailand, at the same place where it happened as well in 1992. pic.twitter.com/naXD9ubttP

The Haew Narok (Hell’s Fall) waterfall has a history of similar incidents and a herd of eight elephants died after falling in 1992.

Thailand’s Department of National Parks, Wildlife and Plant Conservation said officials were called to the scene on Saturday at 03:00 local time when a group of elephants was blocking a road by the waterfall.

There are around 300 wild elephants in the park, which covers more than 2000 square kilometres of forest and grassland.

It is home to various wild animals, including bears, elephants and gibbons, and is a popular destination for tourists.