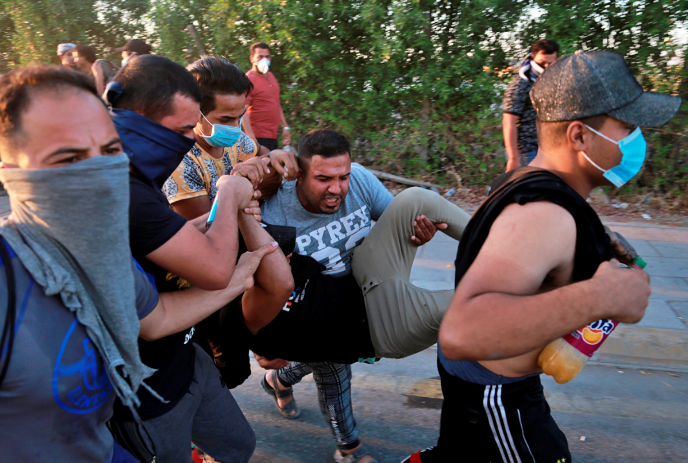 Protesters carry a wounded comrade to safety amid a hail of bullets in havoc-stricken Baghdad. Photo: AP/Hadi Mizban

It was the fifth day of wild demonstrations that have left at least 100 dead, most in the smoke-wreathed Iraqi capital where the stench of burning tyres and tear gas fills the air.

Since Tuesday, thousands have taken to the streets of several areas in oil-rich Iraq to protest corruption, lack of jobs and poor services – in particular access to electricity and clean water.

The latest deaths included four people who were killed on Saturday when security forces used live rounds to disperse renewed protests in the capital of Baghdad, witnesses said.

Security forces opened fire at around 200 protesters who gathered at the road linking Falastin Street with Tayeran Square in eastern Baghdad, they added.

The protests, largely led by young people, were renewed at the weekend after a two-day-old curfew in Baghdad was lifted early on Saturday.

The protesters barricaded streets with bonfires, which prompted security forces to descend on the fiery barricades and give chase to fleeing activists, according to witnesses.

NRT said that “several” of the channel’s employees were “severely beaten” and that the gunmen broke equipment “knocking the channel off the air at least temporarily.”

The Iraqi broadcaster also reported that the gunmen attacked local police in the area as well as offices of other tv channels including Dijla, al-Hadath and Al-Ghad.

Al Arabiya cited one of their correspondents as saying that “colleagues have been injured during the storming of our office by gunmen.”

The correspondent, who was not named, was also cited as saying that the gunmen “smashed our equipment and mobile phones,” adding that the Saudi-owned broadcaster had received threats in recent days.

Other demonstrators gathered outside the building of the provincial council in Babil in central Iraq, chanting anti-government slogans.

At least 100 people, mainly demonstrators, have been killed in the anti-government rallies across Iraq since Tuesday, the independent High Commission for Human Rights, said.

Ali al-Bayati, a member of the commission, said more than 4,000 other people have been injured in the violent unrest.