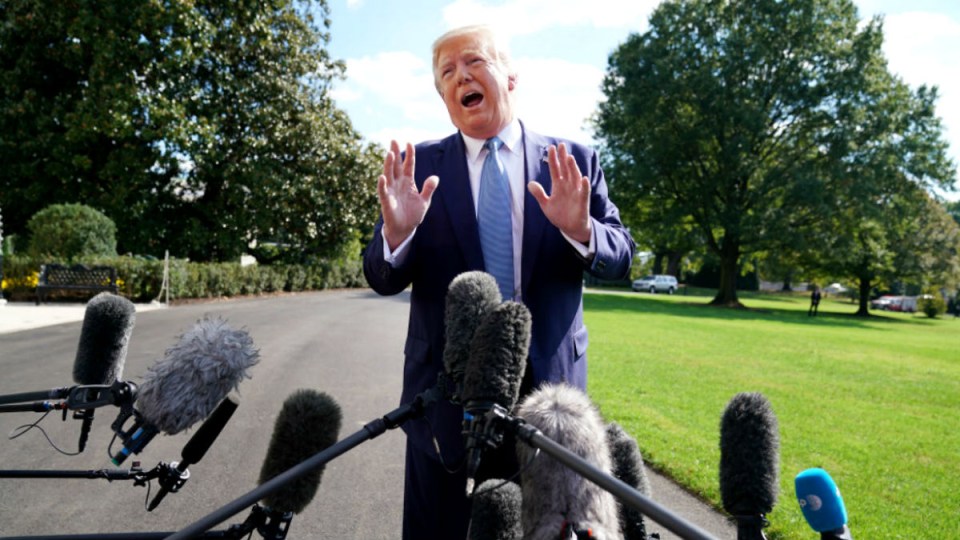 The impeachment of US President Donald Trump has become more likely after the House Democrats issued a subpoena to the White House asking for documents related to Ukraine.

This is the first time the inquiry has reached directly into the White House. But, though Mr Trump has in recent days been becoming increasingly agitated, he remained defiant on Saturday, warning the Democrats would pay a “tremendous price at the polls”.

Meanwhile, in another sign a CIA whistleblower’s complaint is credible, The New York Times reported that a second intelligence officer may be about to lift the lid on their knowledge of Trump’s dealings with Ukraine.

….of Ukraine, and cannot find any reason to charge the President with high crimes & misdemeanors. This is just a phony Witch Hunt, perpetuated by Democrats to get rid of Trump because they cannot beat him in a fair election.” Richard Ketay

For months the Democrats have bickered about the political dangers of impeaching the president – but following the high-level whistleblower’s complaint, it has become a compelling moral issue that can’t be talked away, regardless of the ballot-box consequences.

The subpoena, filed on Friday (US time), includes a request for documents and communications connected to:

“We deeply regret that President Trump has put us – and the nation – in this position, but his actions have left us with no choice but to issue this subpoena,” the Democrats wrote in a letter to the White House.

The Trump administration has blasted the impeachment inquiry as nothing more than a costly stunt by the Democrats and has refused to cooperate with the investigation.

“This subpoena changes nothing – just more document requests, wasted time, and taxpayer dollars that will ultimately show the President did nothing wrong,” press secretary Stephanie Grisham said in a statement.

“The Do Nothing Democrats can continue with their kangaroo court while the President and his Administration will continue to work on behalf of the American people.”

Most Republicans have remained tight-lipped about the Ukraine allegations, but others such as Senator Mitt Romney have called out Mr Trump’s behaviour as “wrong”.

Why the interest in Mr Trump’s talks with Ukraine?

During his July phone call with Mr Zelenskiy, Mr Trump allegedly asked the Ukrainian government to dig up dirt on Democrat Joe Biden, his potential rival for the White House in the 2020 election, as well as Biden’s son, Hunter.

The president reportedly also asked the Ukrainians to look into a Fox News conspiracy theory that suggested Ukraine, not Russia, was behind foreign tampering in the 2016 election.

It has also been reported Mr Trump framed the requests as a “favour” after reminding Mr Zelenskiy “the United States (had) been very, very good to Ukraine”.

At the time of the phone call, Mr Trump had suspended hundreds of millions of dollars in military aid approved by Congress for Ukraine to defend itself against Russia.

What are the chances Mr Trump will be impeached?

At this stage, the matter is just an inquiry, but as the evidence mounts it becomes ever more possible that Mr Trump will be impeached and formally charged.

But even if he does get impeached, it is unlikely he will be removed from office.

Only two US presidents have been successfully impeached – Bill Clinton and Andrew Johnson – and neither of them was removed from office.

Richard Nixon faced impeachment for possible obstruction of justice over the Watergate scandal, but he resigned before the House could vote.

If the House of Representatives do vote to impeach Mr Trump, the indictment will then move to the Republican-dominated Senate, which has the power to remove Mr Trump from office if more than two-thirds of them agree to do so, in a hearing chaired by the chief justice.

It is unlikely senators will act to impeach Mr Trump without fierce public pressure.

Senate Majority Leader Mitch McConnell and his fellow Republican senators have tried hard to stonewall attacks on the president.

“If this is the ‘launching point’ for House Democrats’ impeachment process, they’ve already overplayed their hand,” Senator McConnell said in a statement to Politico.

However, Senator McConnell, one of the canniest and toughest operators on Capitol Hill, also told CNBC that he would have “no choice” under Senate rules but to take up impeachment if the House votes to charge Mr Trump.