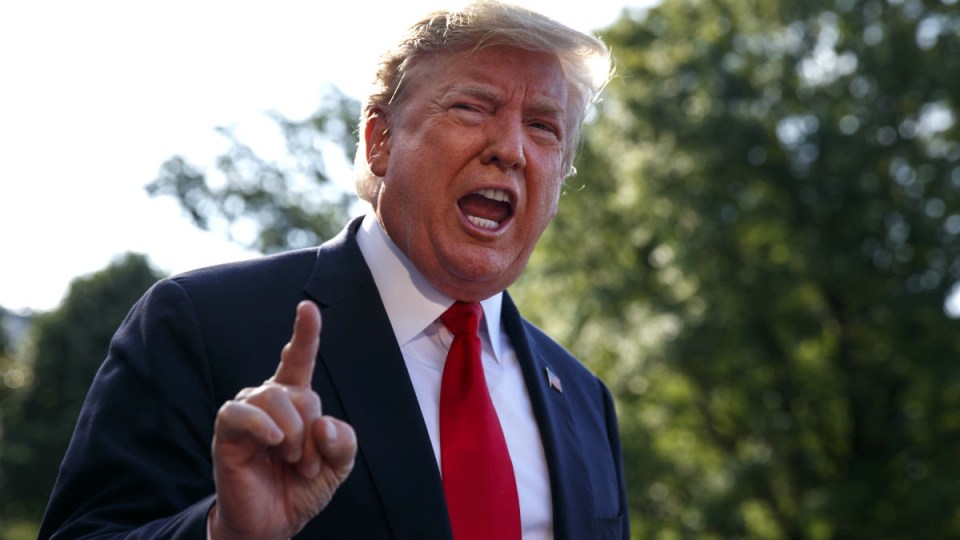 President Donald Trump has been accused of having a meltdown as an impeachment inquiry is underway in Washington. Photo: AAP

Donald Trump has been accused of “melting down” as he ramped up his campaign against Joe Biden, calling on China to investigate his political rival.

Without offering any evidence, the US President urged China to investigate the Bidens over a “crooked deal”, saying “nobody has any doubt that they weren’t crooked”.

Mr Trump’s latest unsubstantiated spray came as the first impeachment inquiry testimony was underway amid mounting concerns from his own side that the President is not handling the situation and has no plan.

Former US special envoy to Ukraine Kurt Volker was the first closed-door testimony on Friday before three congressional committees.

Republican Mike Turner issued the first statement from the secret hearing, saying: “I do not believe that Volker’s testimony advanced Schiff’s impeachment agenda.”

Mr Trump is the target of an impeachment investigation for privately asking the Ukraine president to investigate Joe Biden, a Democratic front-runner for the 2020 presidential election.

The President has repeatedly made corruption claims against Mr Biden and his son Hunter, but there has been no evidence of wrongdoing.

Rather than stepping back, Mr Trump has escalated his attacks against the Bidens, publicly declaring that the Chinese should also investigate them.

Mr Trump and his personal lawyer Rudy Giuliani have tried to raise suspicions about Hunter Biden’s business dealings in China but there is no evidence the former vice president benefited financially from his son’s business relationships.

The Biden camp has hit back, accusing the President of “melting down” and telling “grotesque lies over truth”.

Mr Biden also spoke out, saying he would not be destroyed by the president and his “hatchet men”.

House Intel chairman Adam Schiff responded to the President’s comments, saying Mr Trump was not learning from his mistakes.

“Once again you have the President of the United States suggesting, urging, a foreign country to interfere in our presidential elections,” he said.

Mr Trump’s claims of a China deal centre on Mr Biden’s official visit to the country in 2013 as US vice president, joined by Hunter, where he met Chinese President Xi Jinping and other officials.

Republicans have questioned Hunter’s dealings on the trip.

However, the President has not backed down from his accusations, instead launching a stream of attacks against the Democrats that have been described as increasingly manic.

There wasn’t ANYTHING said wrong in my conversation with the Ukrainian President. This is a Democrat Scam!

Mr Trump has sought to implicate Mr Biden and his son in the kind of corruption that has long plagued Ukraine.

Hunter Biden served on the board of a Ukrainian petrol company at the same time his father was leading the Obama administration’s diplomatic dealings with Kiev.

Though the timing raised concerns among anti-corruption advocates, there has been no evidence of wrongdoing by either the former vice president or his son.

Mr Biden is one of the pacesetters in the Democratic Party primaries that will determine Mr Trump’s opponent in next year’s presidential election.

Trump accused of meltdown after calling for China probe into Bidens