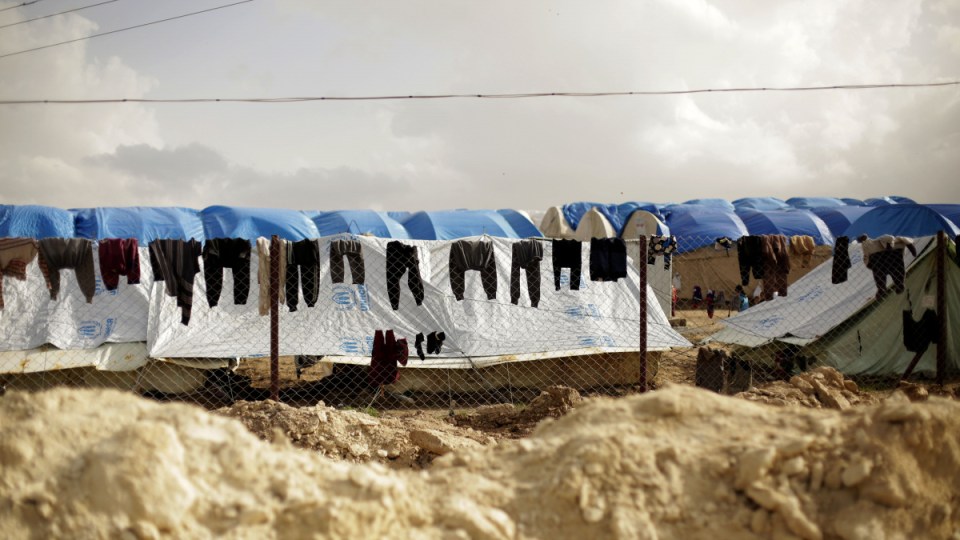 There are fears for the lives of the Australians living in al-Hawl. Photo: AAP

The father of an Australian woman living with her children in a Syrian refugee camp fears time is running out to get them to safety, amid reports gunfire battles are increasing within the compound.

Doctors on the ground at the notorious al-Hawl camp say they have been forced to withdraw some medical support to protect aid workers, as conditions in the camp begun “deteriorating sharply”.

A Sydney man is among the voices calling for the Foreign Minister Marise Payne to let the 66 Australian women and children return home to safety.

But he is facing tough opposition, with the federal government and terror experts warning that national security must be the priority.

Kamalle Dabboussy’s heart sank when his daughter Mariam texted him from the camp on Tuesday night.

“They’re very worried. They’re all very worried. She sent me a text that said ‘I can’t die from bullets in a fabric jail’,” Mr Dabboussy said.

“That’s the exact wording. There’s that sudden jolt in your heart. To get that from your own daughter is tough.

He worries he may never see his grandchildren again, adding the family could hear gunshots from their tent.

The camp is divided into separate areas by nationality, and there are varying levels of extremism among the women.

But Mr Dabboussy’s daughter and other Australian women who have spoken from the camp have said they are not radical and, according to an ABC Four Corners report, claim they were tricked into going to Syria.

Tensions rose this week when hardcore Islamic State supporters fought with the Kurdish forces that patrol the 700,000-strong camp.

“Our concern is as to why the radical elements in the camp now have small arms. There were gunfights between them and security forces and that’s a new development,” Mr Dabboussy told The New Daily.

“They’ve had to bring in reinforcements. There are light infantry tanks and small missiles and the women are confined to the tents.”

Residents, guards and aid workers all say conditions in the camp are dire.

Decapitated corpses have turned up in recent days and doctors were held hostage as the group of radical fanatics tried to take control.

Mustafa Bali, the head of the Syrian Kurdish press office, said in a tweet the situation in the camp was “deteriorating sharply,” adding that ISIS has “stepped up their regrouping efforts through women in the camp”.

Doctors on the ground have said something “has gone terribly wrong” with security.

“Our doctors should not be treating women for gunshot wounds in a closed, camp setting; if we find ourselves in such a situation, something has gone terribly wrong,” said Robert Onus, Médecins Sans Frontières (Doctors without Borders) emergency manager for Syria.

“We are extremely worried about the wellbeing of the people held in the camp,” Mr Onus said.

“The current insecurity in the camp has forced MSF to temporarily reduce its medical activities and limits the ability of humanitarian organisations to deliver much-needed assistance to a very vulnerable population.”

In the nine months leading up to September, there were 406 deaths in the camp, 313 of which were children, according to the World Health Organisation.

Only one family, which can’t be named for legal reasons, has been brought back from the camp.

The Morrison government has said it’s in no rush to repatriate the women and children, saying each must be dealt with on a ‘case-by-case basis’.

“The repatriation of any people in Syria in those contexts at the moment is very, very difficult,” Ms Payne told ABC radio on Wednesday.

“As far as individuals are concerned and in some cases families, we are assessing each of those cases on their merits, but our first duty is of course to protect Australia and Australians,” she said.

Some terrorism experts say it’s too dangerous to bring them home because Australia is not ready for them.

“I don’t think you can dispute the fact some people who have been exposed to ISIS way of life, there is a very real risk that some of them have become completely attuned to that way of thinking,” said former NSW police deputy commissioner Nick Kaldas, who spent a career investigating terrorism.

“Many western countries are struggling to find a solution to this problem of returning fighters and the families who were tied up with them,” Mr Kaldas said.

“There are no easy answers. It’s a divisive issue and a lot of people have very firm opinions.”

While the government has been doing a good job, the unprecedented nature of the situation means much of it is worked out as they go along.

“I don’t think the criteria or framework has really matured yet. That’s clear. It’s a work in progress.”

But Mr Dabboussy is pleading with the federal government to think about the toll on the lives of the women and children.

“If they don’t act soon there will be a preventable impact on those women and children. A preventable injury, death or illness,” he said.

“To leave them there would mean extrajudicial punishment for what reason? They’re not being charged, there is no legal basis for their detention.”

‘I can’t die from bullets in a fabric jail’: Desperate father fears for lives of Australians in Syrian camp