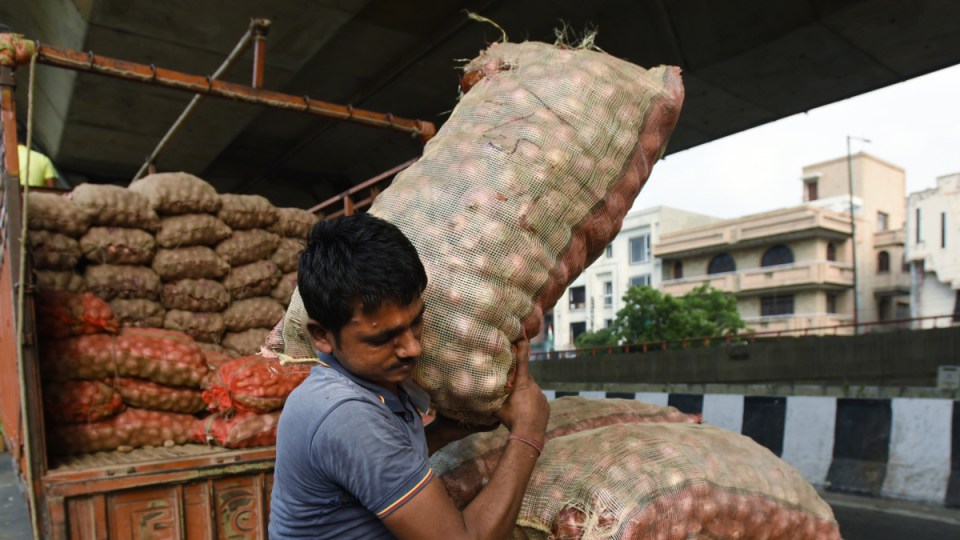 That might look like a lot of onions, but it's minimal compared to India's annual 2 billion-plus kilograms of exports last year. Photo: Getty

India is serious about its onions. So much so that the Indian government has imposed an export ban on the vegetable, due to a dire shortage of its home-grown crops.

More than that, retailers are limited to how many onions they can stockpile – if you’re found to be hoarding, you’ll be forced into selling them so the love gets shared around.

So why the tears?

In the past few months, the states that are the key producers of onions have been hit by droughts and then floods that have decimated crops, creating the shortage.

Combined with poor stocks from last year’s season, domestic prices have risen, putting them out of the grasp of everyday household budgets.

India is also a key exporter to its neighbouring countries (more than two billion kilograms last financial year), all of which rely heavily on the aromatic veg for their cooking.

Before the export ban, the Indian government sanctioned a minimum export price, resulting in sale prices in countries like Bangladesh rising by as much as 700 per cent.

While the shortage is having an effect on the staple meal, curry, it’s also playing a role in India’s political diet.

Onions have overturned governments before.

The Economic Times reported that in 1998, a spike in onion prices was credited as the main reason behind the downfall of the then-reigning party of the Delhi government.

Prime Minister Narendra Modi is deep in re-election mode, and the onion situation threatens to put a sting in his plans, hence his drastic action in stopping all onions at India’s borders.