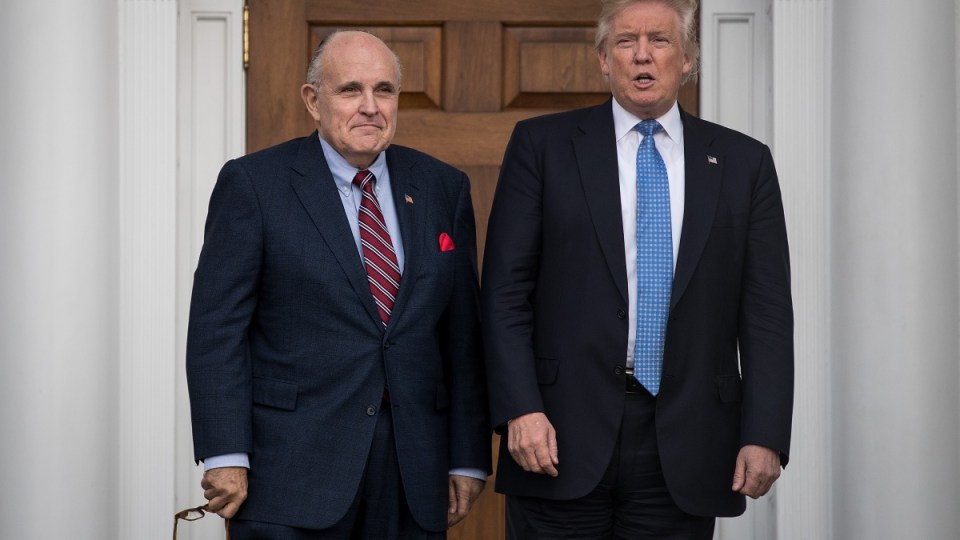 Democrats investigating Donald Trump as part of an impeachment inquiry have issued a subpoena to his lawyer Rudy Giuliani. Photo: Getty

US House of Representatives Democrats investigating whether to impeach President Donald Trump have issued a subpoena to his lawyer Rudy Giuliani, seeking documents related to dealings with Ukraine by October 15.

The Democratic-led House Intelligence Committee issued the subpoena on Monday in consultation with two other House panels and said in a statement that Giuliani had acknowledged on television that he asked the government of Ukraine to “target” former Vice President Joe Biden.

Democrats have been moving quickly since House Speaker Nancy Pelosi announced last Tuesday that she was formerly launching an impeachment inquiry.

On Friday, the three committees announced that Secretary of State Mike Pompeo had been subpoenaed, and depositions scheduled for five other State Department officials.

On Monday, Mr Giuliani was asked to hand over documents related to Trump’s effort to pressure Ukrainian President Volodymry Zelenskiy to investigate Mr Biden, a top contender for the Democratic nomination to run against Mr Trump as the Republican president seeks re-election in 2020.

“Our inquiry includes an investigation of credible allegations that you acted as an agent of the President in a scheme to advance his personal political interests by abusing the power of the Office of the President,” the committee chairmen said in a letter to Mr Giuliani.

They said Mr Giuliani had stated that he had evidence such as text messages and telephone records, indicating that other Mr Trump administration officials might have been involved in the scheme to put pressure on Ukraine to become involved in the 2020 election.

Mr Giuliani did not immediately respond to a request for comment.

I have received a subpoena signed only by Democrat Chairs who have prejudged this case. It raises significant issues concerning legitimacy and constitutional and legal issues including,inter alia, attorney client and other privileges. It will be given appropriate consideration.

A letter was also sent to Semyon “Sam” Kislin, a Ukrainian immigrant who has had business ties to Trump and served on Mr Giuliani’s city economic development corporation when Mr Giuliani was mayor of New York.