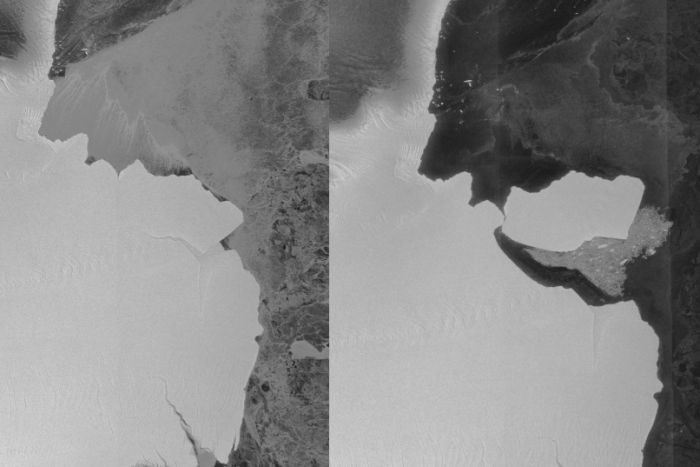 A gigantic iceberg the size of urban Sydney has broken off an ice shelf in Antarctica, the Australian Antarctic Division says.

The 1636-square-kilometre iceberg – named D28 – was calved from the Amery ice shelf in east Antarctica.

“The calving will not directly affect sea level, because the ice shelf was already floating, much like an ice cube in a glass of water,” Dr Galton-Fenzi said.

“But what will be interesting to see is how the loss of this ice will influence the ocean melting under the remaining ice shelf and the speed at which the ice flows off the continent.”

The 60,000-square-kilometre Amery ice shelf is the third largest shelf in Antarctica and is situated between Australia’s Davis and Mawson research stations.

An ice shelf is a section of ice that juts out into the sea.

Snow from the interior builds up and flows out to the edge of the continent. At the edges it thins, and because ice is less dense than water, it sits on top of the ocean instead of on the seabed.

Scientists have been studying the Amery shelf since the 1960s, and recorded the last major calving event in late 1963 or early 1964.

The massive tabular iceberg was about 10,000 square kilometres, and split into two smaller bergs a year later.

Helen Amanda Fricker, from the Scripps Institution of Oceanography in the US, said scientists first noticed a rift in the ice shelf nearly 20 years ago.

“We … predicted a large iceberg would break off between 2010-2015,” Professor Fricker said.

“I am excited to see this calving event after all these years. We knew it would happen eventually, but just to keep us all on our toes, it is not exactly where we expected it to be.

“We don’t think this event is linked to climate change; it’s part of the ice shelf’s normal cycle, where we see major calving events every 60-70 years.”

In July 2017, a one-trillion-tonne iceberg measuring 5800 square kilometres was calved from the Larsen C ice shelf in Antarctica.