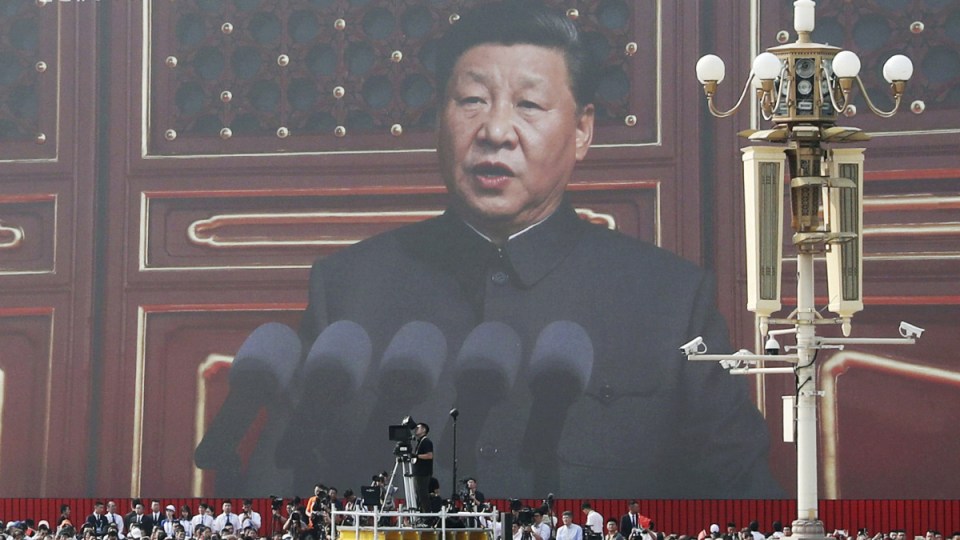 China is celebrating seven decades of Communist Party rule with a massive display of military power in central Beijing, as President Xi Jinping pledged peaceful development but said the armed forces would defend the country’s sovereignty.

Wednesday’s mass parade at Tiananmen Square was China’s most important event of the year as the nation looked to project an image of confidence in the face of mounting challenges, including nearly four months of anti-government protests in Hong Kong and a economy-sapping trade war with the United States.

Party officials, selected members of the public and 188 military attaches from 97 countries were treated to a first-hand look at China’s secretive military, with 15,000 personnel from the People’s Liberation Army marching in a display that was said by some estimates to involve up to 100,000 people in all.

About 580 pieces of the PLA’s most sophisticated military equipment was also on display, including stealth drones. In the skies above, 160 aircraft flew.

A feature of the show of strength was the much-anticipated DF41 intercontinental ballistic missile – with a range of more than 14,000 kilometres, it is said to be capable of hitting anywhere on Earth.

Mr Xi, dressed in a slate grey “Mao” suit and accompanied by his predecessors Hu Jintao and Jiang Zemin, said China will pursue a mutually beneficial strategy of opening up.

In a brief speech marking 70 years of Communist Party rule, Mr Xi also said the country must maintain lasting prosperity and stability in Hong Kong and Macau, and promote the peaceful development of relations with self-ruled Taiwan.

“No force can ever shake the status of China, or stop the Chinese people and nation from marching forward,” Mr Xi said fom the Gate of Heavenly Peace, where Mao Zedong proclaimed the founding of the People’s Republic of China on this day in 1949.

#ChinaDefense China’s newest tank, the Type 15, made its first appearance to the general public at the National Day parade https://t.co/lzbxlGMVHi pic.twitter.com/aTNV85xscc

Mr Xi, whose military modernisation program has rattled nerves around the region, then descended to the street and inspected row upon row of military hardware and immaculately presented troops.

The massed ranks of soldiers shouted back: “Follow the Party! Fight to win! Forge exemplary conduct!”

Mr Xi remains broadly popular in China for his aggressive campaign against corruption and for propelling what is now the world’s second-biggest economy to the forefront of global politics.

But the Communist Party remains nervous about its grip on power and international standing.

#NationalDayParade The Chinese UN Peacekeeping Force participates in the National Day parade for the first time. As of December 2018, China has sent 40,000 soldiers to 24 UN peacekeeping missions. pic.twitter.com/5aFidpK5DO

The capital has been locked down for the parade. Police have told residents whose houses look onto the parade route not to look out their windows.

There will be a civilian parade too, of students, model workers, ethnic minorities and even a few foreigners, walking alongside or travelling in floats celebrating China’s achievements, officials said last week.

Once the show is over, 70,000 doves will be released to symbolise peace, according to state media.

At night, fireworks will light up Beijing.

#NationalDayParade Female members of the militia phalanx parade through the Tiananmen Square. 81 of them are mothers. The training video of the phalanx has amazed Chinese netizens in the past weeks. pic.twitter.com/tiILUCt9ea

Hong Kong went into lockdown on Tuesday with barricades in the city centre, shuttered stores and a heavy riot police presence. Embattled Hong Kong leader Carrie Lam is in Beijing for the anniversary celebrations.