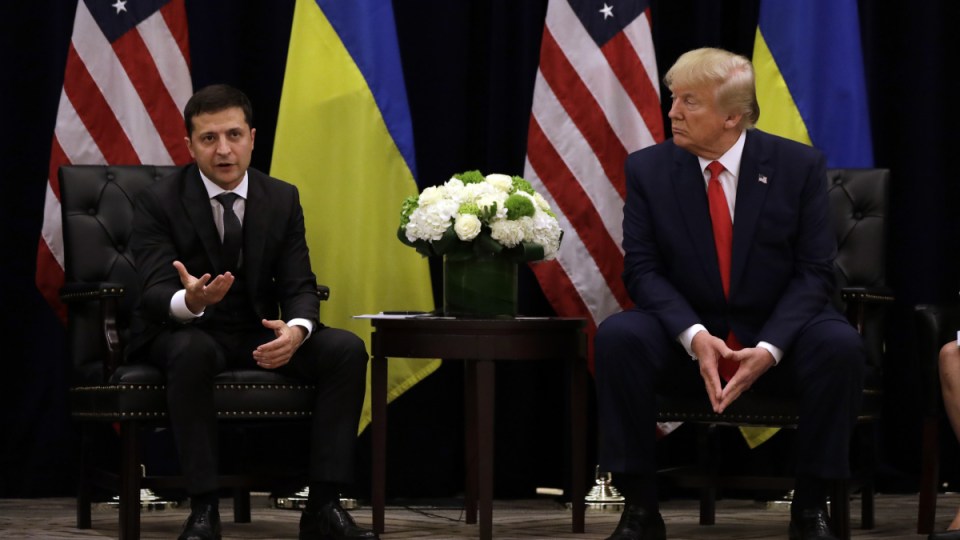 Ukrainian President Volodymyr Zelenskiy said Kiev is unlikely to publish its version of a transcript of a July 25 phone call with US President Donald Trump, at the heart of an impeachment inquiry in Washington.

The White House published its summary of the call last week.

It showed the Republican Mr Trump asking Mr Zelenskiy to investigate one of his main rivals in the 2020 election, former US vice president Joe Biden, and his son Hunter, who sat on the board of a Ukrainian gas company.

Speaking to journalists at an event at a military site near Kiev on Monday, Mr Zelenskiy said he felt it would be wrong to share the Ukrainian summary or transcript of the call.

“Prior to the presidency I was never a diplomat, but I think I have had many such conversations in my life and will have many more,” Mr Zelenskiy said.

“There are certain nuances and things which I think it would be incorrect, even, to publish.”

Asked whether Kiev would open an investigation into the claims against Joe Biden and his son Hunter, per Trump’s request, Mr Zelenskiy said Kiev would not act solely on the orders of other countries.

“We can’t be commanded to do anything. We are an independent country,” Mr Zelenskiy said.

“We are open, we are ready to investigate (but) it has nothing to do with me.

“Our independent law enforcement agencies are ready to investigate any case in which the law was broken.”

It comes after Mr Trump escalated his attacks against the lawmaker leading the impeachment inquiry against him, suggesting that Representative Adam Schiff be arrested for “treason”.

It takes on greater meaning given Mr Trump recently alluded to the death penalty to punish “treason” as he compared whistleblowers to spies.

“Rep. Adam Schiff illegally made up a FAKE & terrible statement, pretended it to be mine as the most important part of my call to the Ukrainian President, and read it aloud to Congress and the American people. It bore NO relationship to what I said on the call. Arrest for Treason?” Mr Trump tweeted on Monday.

The US House Intelligence Committee chairman said he expects the whistleblower to testify “very soon”.

As Democrats and the director of national intelligence worked out key arrangements, Mr Trump’s allies erupted in a surge of second-guessing and conspiracy theorising across the Sunday talk shows.

One former adviser urged Mr Trump to confront the crisis at hand and get past his fury over the probe of Russian election interference.

“I honestly believe this president has not gotten his pound of flesh yet from past grievances on the 2016 investigation,” said Tom Bossert, Mr Trump’s former homeland security adviser.

“If he continues to focus on that white whale, it’s going to bring him down.”

The Fake Whistleblower complaint is not holding up. It is mostly about the call to the Ukrainian President which, in the name of transparency, I immediately released to Congress & the public. The Whistleblower knew almost nothing, its 2ND HAND description of the call is a fraud!

Meanwhile, Democrats are planning a rapid start to their push for impeachment, with hearings and depositions starting this week.

Mr Schiff has said the whistleblower has agreed to testify.

His committee has been negotiating to interview the whistleblower, who reported to the inspector-general for the intelligence community that Mr Trump had urged Mr Zelenskiy to investigate Mr Biden.

The whistleblower also said that White House officials then moved to “lock down” the details by putting all the records of it on a separate computer system.

“The president of the United States is the whistleblower,” Mr Miller said.

“I am deeply frustrated with what he and the legal team is doing and repeating that debunked theory to the president,” Mr Bossert said.

Mr Giuliani not only repeated it but also brandished what he said were affidavits that support them and claimed that Mr Trump “was framed by the Democrats”.

He also at one point said he would not co-operate with Mr Schiff, but then acknowledged he would do what Mr Trump tells him.