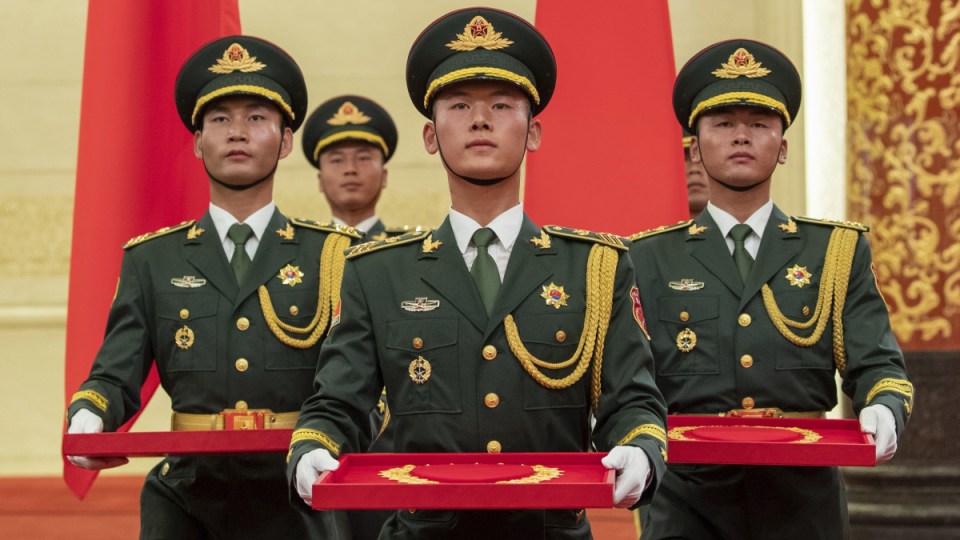 China's military might will be on display on Tuesday. Photo: AAP

It’s the Chinese Communist Party’s 70th year in power, and to celebrate it is bringing out the big guns – rumoured to include a new nuclear weapon that can reach the United States in half an hour.

The country’s slowing economy, treatment of Uighurs, continuing clashes with protesters in Hong Kong and trade war with the US will be shoved aside on Tuesday so tanks, ballistic missiles and drones can take centre stage.

Authorities have been clamping down on anti-China sentiment even more so in recent days, with locals reporting stronger censorship online, as the nation prepares for huge celebrations including a military parade at Tiananmen Square.

Party officials, selected members of the public and 188 military attaches from 97 countries will be treated to a first-hand look at China’s secretive military, as 15,000 personnel from the People’s Liberation Army (PLA) march.

About 580 pieces of their most sophisticated military equipment will be on display, and 160 aircraft will take to the skies above them.

Rumours abound that the pièce de résistance of the parade would be The Dongfeng 41, a nuclear-armed missile that could reach the US in 30 minutes.

The 80-minute extravaganza will herald the achievements of the CCP since it came into power following a bloody civil war in 1949.

“There are quite a lot of observers, including the US military, who say, ‘This is getting close to what we do,’ and they are starting to worry,” said Siemon Wezeman of the Stockholm International Peace Research Institute.

The parade is a chance for the Chinese Communist Party to fly a bright red flag in the face of territorial disputes in Taiwan, the South China Sea, as it challenges Washington’s position as the region’s dominant force.

The ability to project power is increasingly urgent for Chinese leaders who want to control shipping lanes and waters also claimed by Japan, South Korea, Vietnam, the Philippines and other governments.

“It’s going to be an important day for Xi Jinping and the CCP more broadly for two reasons. It provides an opportunity to showcase improved military capability and it can show the world its economic achievements over the reform era,” Mr Lyons Jones said.

“But Hong Kong and a slowing economy could complicate the narrative this CCP is trying to put out.

“The Chinese Communist Party want to appear strong both in the eyes of the Chinese people and its adversaries in the United States and its allies.”

The country has stepped up its security before the anniversary, with police performing random identity checks throughout the capital, strict rules forbidding the use of walkie-talkies and a ban on some police officers drinking.

That didn’t stop Hu Xijin, editor-in-chief of state tabloid Global Times from complaining the restriction on the internet had gone too far before the big day.

“National Day is approaching and it’s extremely difficult to access the web; even our work at the Global Times is affected,” Hu wrote in a post on Weibo, which he later deleted.

“The overwhelming majority of Chinese people are patriotic and love the party, with strong political convictions.

“This country is not fragile. I suggest society should have greater access to the outside internet, which will benefit the strength and maturity of China’s public opinion, scientific research and external communications, as well as China’s national interests.”

Professor Yingjie Guo from The University of Sydney said the strict security was normal for a big event.

“Security is always tightened up in the country, especially in Beijing, before major national events,” the professor said.

“Many are unhappy about the stepped-up restrictions and many complain in private. I doubt though many will speak out in public against the tightened control.

“Those who do are most likely to be censured or detained.”

The crisis in Hong Kong threatens to take some of the shine off the celebrations.

Pressure will be on the authorities to make sure protests in the city don’t overshadow Beijing’s military might.

For their part, the protesters have moved their message into other cities.

As China’s military planes fly overhead at the anniversary celebration, here in Australia pro-protest trucks will travel around the CBDs of Melbourne and Sydney.

In Hong Kong, protesters are preparing for violence by police.

Protester Cola, who did not want her surname used, told The New Daily young people would not be deterred.

“I think the police will be more violent, but the protesters will not be afraid,” she said.

“We can’t lose because if we lose, Hong Kong will lose, too.”