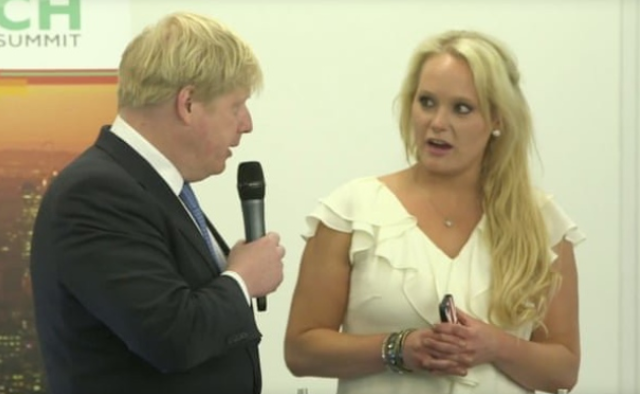 Boris Johnson with Jennifer Arcuri, the woman at the centre of his latest scandal. Photo: Innotech /YouTube.

British Prime Minister Boris Johnson’s energetic love life has put him at the centre of an escalating scandal, with critics charging he gave favourable treatment and a large sum of public money to a woman he was allegedly sleeping with at the time.

The US businesswoman at the centre of the latest dark cloud over 10 Downing Street has reportedly told friends they had an affair while he was mayor of London.

On Friday, Mr Johnson was referred to the police complaints body to assess if he should face a criminal investigation over his links with former model Jennifer Arcuri.

The latest controversy surrounding the mop-haired Conservative caps a series of setbacks as he attempts to helm Britain’s exit from the Europe Union by October 31.

His latest troubles erupted after the Greater London Authority said it had recorded a “conduct matter” against Mr Johnson over allegations Ms Arcuri received favourable treatment because of their friendship while he was mayor of London.

The Independent Office for Police Conduct is now considering whether there are grounds to investigate Mr Johnson for the criminal offence of misconduct in public office.

Mr Johnson has denied any wrongdoing in relation to his links with Ms Arcuri.

The Sunday Times has reported that Ms Arcuri confided to four friends that they had been engaged in an affair during his time in City Hall.

The paper said that David Enrich, now the finance editor of The New York Times, had said he had been told of the alleged relationship by two of her friends when he was working for another newspaper.

His account was said by the Sunday Times to corroborate that of other sources who had spoken to Ms Arcuri.

The GLA statement, denounced by Downing Street as a “nakedly political put-up job” on the eve of the Tory Party conference, came after details of Ms Arcuri’s links to Mr Johnson were first highlighted in the Sunday Times last week.

The newspaper reported that Arcuri was given STG126,000 ($A228,946) in public money and privileged access to three foreign trade missions led by Johnson while he was mayor.

Enrich told The Sunday Times that he had been working on an article on Ms Arcuri’s business partner for the Wall Street Journal, published in 2013, when he interviewed her and spoke to a number of people in her close circle.

“Two friends from her business class said they had been told by Arcuri that she was sleeping with Boris. They told me that before and after that story ran,” he told the paper.

The latest allegations of infidelity follow a string of well-publicised stories involving Mr Johnson’s private life, some of which plagued his 25-year marriage to second wife Marina Wheeler.

In 2004 he was sacked from the Tory frontbench over a reported affair with journalist and colleague at the Spectator Petronella Wyatt.

He described claims about the relationship as “an inverted pyramid of piffle” at the time.

Affair claims reared their head again in 2006 when it was reported that the married father of four had been romancing Anna Fazackerley of the Times Higher Education Supplement.

The Appeal Court ruled in 2013 that the public had a right to know that he had fathered a daughter during another adulterous liaison with another woman, Helen Macintyre, while mayor of London in 2009.

Boris Johnson’s love life at centre of his latest scandal