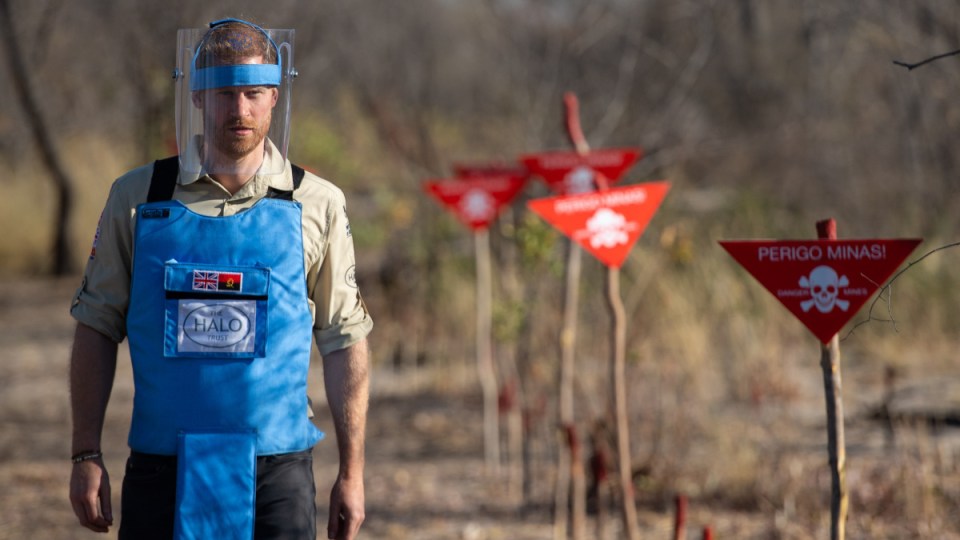 The Duke of Sussex walks through a minefield in Dirico, Angola, during a visit to see the work of landmine clearance charity the Halo Trust. Photo: AAP

Prince Harry has retraced the footsteps of his late mother Diana whose visit to Angola in 1997 sparked international momentum to rid the world of landmines.

The Duke of Sussex strolled down Princess Diana Street – now a bustling road of shops, businesses and schools in Huambo – which had been a mine site when the princess visited.

He also visited an active mine site in the town of Dirico to help destroy a landmine and met amputees at an orthopaedic centre in Huambo.

Photos of Diana dressed in protective gear brought attention to the human impacts of landmines, sparking global efforts to end their production and use.

On Friday (local time) Prince Harry paused for a moment of personal reflection under a tree which is today all that remains from the original mine site.

“It has been emotional retracing my mother’s steps along this street 22 years on,” Harry said.

“Being here on this transformed and bustling street – the site where my mother once walked through a live minefield – shows the tremendous impact that clearing landmines has on communities and their futures.”

Princess Diana died a few months before an international treaty prohibiting landmines was drafted and signed.

It has been calculated that 100,000 land mines buried during the country’s 27-year civil war have been cleared from Angola since 1994, according to the British charity Halo Trust.

Another 1104 remain in the ground  – still causing deaths and horrific injury to the most vulnerable – which could cost $388 million to safely remove.

A significant drop in donations from $71 million in 2006 to a record low of $4 million in 2017 threatened to end landmine clearing efforts until Prince Harry urged countries this year to help Angola.

Prince Harry again called on the international community to redouble its efforts in Angola.

The Duke of Sussex described how thousands of parents in Angola are forced to choose between cultivating mine-infested land or letting their families starve.

“The work of de-mining is dangerous, expensive and laborious. And I have the utmost admiration and respect for all who do this hazardous work and risk their lives in the service of their country,” he said.

“Let us consign these weapons to the history books for good.”

Harry stopped in at the Huambo Orthopaedic Centre – where his mother had been decades ago – and met patients.

The prince went to a landmine detonation field in the town of Dirico were he personally helped destroy a mine.

The prince is on a 10-day visit to southern Africa, together with wife Meghan and their four-month-old son Archie, who have remained behind in South Africa.

Harry will travel to Malawi after Angola and then reunite with Meghan in South Africa on October 1, a day before they wrap up their trip in Johannesburg.