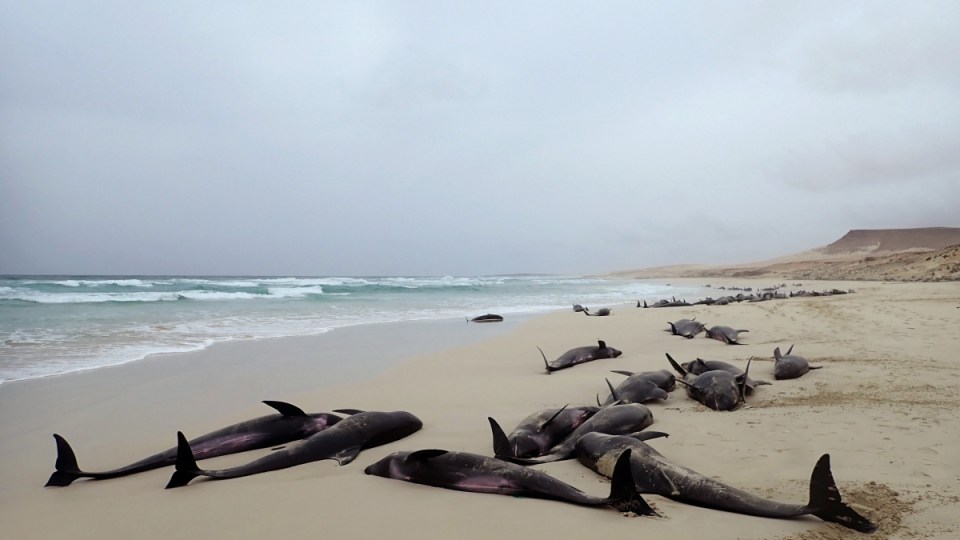 Hundreds of dolphins have mysteriously beached themselves on a popular tourist island off West Africa.

About 200 melon-headed dolphins were found on Boa Vista island, in the Cape Verde islands.

Despite efforts by about 100 officials, residents and tourists to drag some of the animals back out to sea, many returned and died on the sands.

“Unfortunately, upon being re-introduced in the sea, most of the animals stranded again,” said BIOS Cape Verde on its Facebook page.

“We thank everyone who showed up to help with the rescue efforts.”

Bulldozers buried 136 of the dolphins to avoid public health issues as scientists puzzle over the cause of the dramatic and traumatic phenomenon.

BIOS Cape Verde, a volunteer environmental association in the former Portuguese colony, said it took samples from 50 dolphins to aid with scientific analysis.

Four other dolphin corpses were placed in deep freeze by the local council.

The group said veterinarians from the University of Las Palmas in Spain’s Canary Islands were due in the coming days to perform tests.

Whales and dolphins stranding themselves occur around the word, including Australia, but scientists are yet to unlock the mystery to why.

There are a number of theories including disorientation leading them to shallow waters – such as when chasing a school of prey – the shape of coastlines or panic if being chased.

In March last year, 150 short-finned pilot whales (a species of dolphin) stranded themselves at Hamelin Bay, about 320km south of Perth.

Dolphin and whale watching are popular in the Cape Verde islands, with Boa Vista having the largest number of sightings.

Dolphins can be seen all year round and swim alongside boats.

About 100 people participated in the rescue efforts including the Agriculture and Environment Ministry, maritime authorities, local firefighters, fisheries inspector, police, and conservation groups.