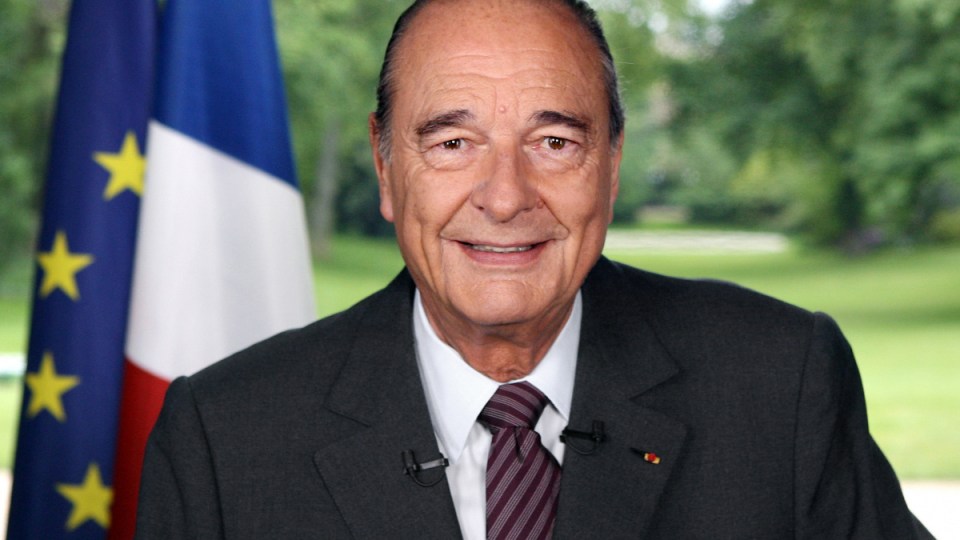 Jacques Chirac in 2007 as he farewells the French nation's top job. Photo: AP

Jacques Chirac, a two-term French president who was the first leader to acknowledge France’s role in the Holocaust and defiantly opposed the US invasion of Iraq in 2003, died on Thursday at age 86.

His son-in-law Frederic Salat-Baroux told The Associated Press that Chirac died “peacefully, among his loved ones”.

He did not give a cause of death, though Mr Chirac had had repeated health problems since leaving office in 2007.

Mr Chirac was long the standard-bearer of France’s conservative right, and mayor of Paris for nearly two decades.

Yet Mr Chirac showed courage and statesmanship during his presidency.

President @JunckerEU was moved and devastated by the news that Jacques Chirac has passed away.
For him, Europe is not only losing a great statesman, but also losing a dear personal friend.

His legacy for France and the European Union will stay with us forever. 🇫🇷🇪🇺 pic.twitter.com/bRui4it791

In what may have been his finest hour, France’s last leader with memories of World War II crushed the myth of his nation’s innocence in the persecution of Jews and their deportation during the Holocaust when he acknowledged France’s part.

“Yes, the criminal folly of the occupiers was seconded by the French, by the French state,” he said on July 16, 1995.

“France, the land of the Enlightenment and human rights … delivered those it protects to their executioners.”

With words less grand, the man who embraced European unity – once calling it an “art” – raged at the French ahead of their “No” vote in a 2005 referendum on the European constitution meant to fortify the EU.

“If you want to shoot yourself in the foot, do it, but after don’t complain,” he said.

He was personally and politically humiliated by the defeat.

Former French President Jacques #Chirac has died at the age of 86. He had been in politics for almost 60 years, having held the office of Prime Minister and Mayor of #Paris. #RIPChirac #RIP

His popularity didn’t fully recover until after he left office in 2007, handing power to protege-turned-rival Nicolas Sarkozy.

Mr Chirac ultimately became one of the French’s favourite political figures, often praised for his down-to-earth human touch rather than his political achievements.

But his government quickly fell out of favour and parliamentary elections in 1997 forced him to share power with Socialist Prime Minister Lionel Jospin.

Much to criticise about his time as French president (twice), prime minister (twice) and Paris mayor. But Jacques Chirac (1932-2019) was right on Iraq, prescient about multi-polarity, brave to acknowledge France's responsibility under Vichy–and an improbable icon of French cool pic.twitter.com/KHkQE9gHaM

Mr Chirac’s outspoken opposition to the US-led invasion of Iraq in 2003 rocked relations with France’s top ally, and the clash weakened the Atlantic alliance.

At home, myriad scandals dogged Mr Chirac, including allegations of misuse of funds and kickbacks during his time as Paris mayor.

He was formally charged in 2007 after he left office as president, losing immunity from prosecution.

In 2011, he was found guilty of misuse of public money, breach of trust and illegal conflict of interest and given a two-year suspended jail sentence.

He did not attend the trial.

His lawyers explained he was suffering severe memory lapses, possibly related to a stroke. While still president in 2005, Mr Chirac suffered a stroke that put him in the hospital for a week. He had a pacemaker inserted in 2008.