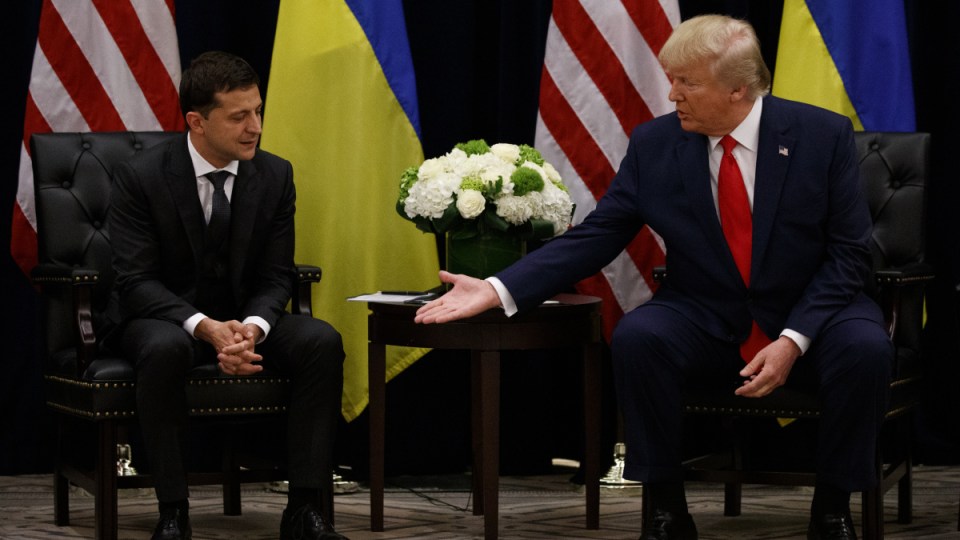 Donald Trump’s own words reveal he pressed Ukraine’s president to investigate a key political rival in what one lawmaker described as a “classic mafia-like shakedown”.

It comes as the Ukraine president himself told media at a press conference with Mr Trump it was a “normal” conversation and “nobody pushed me”  to which Mr Trump added: “There was no pressure”.

Mr Trump later addressed media reiterating his claims of a “witch hunt” and insisting “I didn’t do it. There was no quid pro quo.”

An impeachment inquiry has been launched into the half-hour phone call in which it’s claimed Mr Trump sought a “quid pro quo” – asking a favour from Ukraine to investigate rival presidential candidate Joe Biden after earlier withholding military aid to the country.

Mr Biden is the frontrunner for the Democratic presidential nomination for the 2020 election.

The transcript shows Mr Trump making direct reference to Mr Biden as he asked for an investigation into a Ukrainian gas company for which  Mr Biden’s son Hunter had served as director.

“The other thing, there’s a lot of talk about Biden’s son, that Biden stopped the prosecution and a lot of people want to find out about that, so whatever you can do with the attorney general would be great,” Mr Trump says according to conversation notes.

“Biden went around bragging that he stopped the prosecution so if you can look into it… It sounds horrible to me.”

Mr Zelenskiy replies: “We will take care of that and we will work on the investigation of the case.”

“It’s a joke. Impeachment, for that? When you have a wonderful meeting or a wonderful phone conversation?” https://t.co/Mw98zEJsXN pic.twitter.com/4q4NtCOHAX

In another conversation highlight, the Ukrainian president thanks Mr Trump for “great support in the area of defence” even though the Americans had a week earlier frozen about $400 million ($592 million) in military aid.

The US president responds to the thanks, saying: “I would like you to do us a favour though because our country has been through a lot and Ukraine knows about it”.

At another point Mr Trump says: “I will say that we do a lot for Ukraine,”  adding that “the United States has been very, very good to Ukraine”.

Mr Zelenskiy responds that Mr Trump is “1000 per cent” right, and thanks him for “your great support in the area of defence”, also expressing interest in making another US arms purchase.

House Intel chairman Adam Schiff responded to the transcript release, saying it read like a classic mob shakedown of a foreign leader.

Mr Schiff said the call shows “the president of the United States engaged in a shakedown of a foreign president” while “he is withholding vital military support to an ally, asking a favor of that ally to investigate his opponent”.

At no point does Mr Trump explicitly tell the Ukrainian president that the US aid is contingent upon him investigating Biden.

But a timeline of events reveals that America withheld the military aid to the Ukraine on July 18.

The conversation between the two presidents occurred about a week later on July 25 and the money was reinstated to Ukraine after that on September 11.

A whisleblower raised a complaint about the phone call on September 9.

Mr Trump has since doubled down on his own claims against Joe Biden and son Hunter, calling for transparency about about the “millions of dollars that have been quickly and easily taken out of Ukraine and China”.

“Additionally, I demand transparency from Democrats that went to Ukraine and attempted to force the new President to do things that they wanted under the form of political threat,” he tweeted.

I have informed @GOPLeader Kevin McCarthy and all Republicans in the House that I fully support transparency on so-called whistleblower information but also insist on transparency from Joe Biden and his son Hunter, on the millions of dollars that have been quickly and easily….

House of Representatives Speaker Nancy Pelosi who launched the official impeachment inquiry said the notes confirm Mr Trump engaged in behaviour that undermined the integrity of US elections, the dignity of presidency and American national security.

Ms Pelosi has directed six committees to proceed with investigations of the president’s actions.

The inquiry could lead to articles of impeachment in the House, which could trigger a trial in the Senate on whether to remove Mr Trump from office.