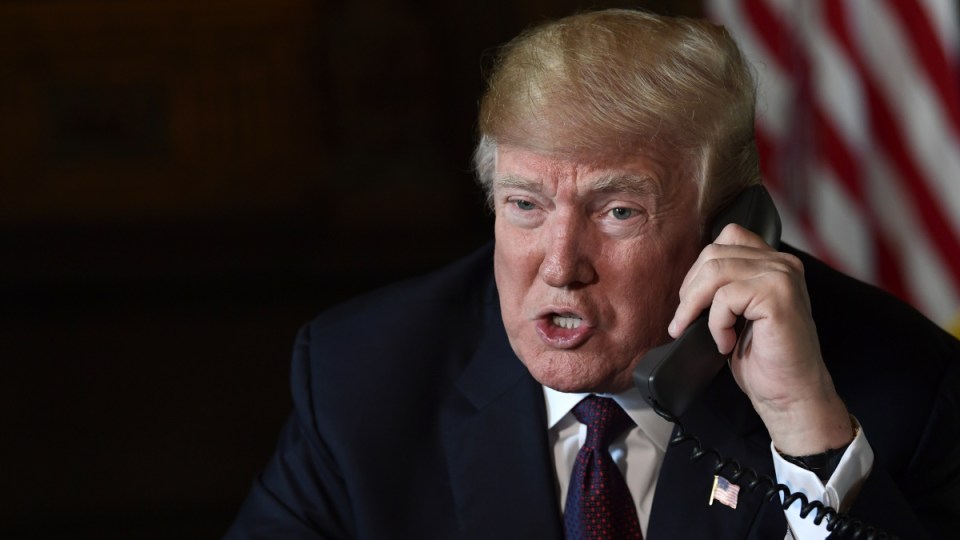 Mr Trump's phone call with his Ukrainian counterpart is behind the Democrats' impeachment push. Photo: AAP

The White House is preparing to release its internal records related to Donald Trump’s recent call with his Ukrainian counterpart whose leak sparked the opening of an impeachment inquiry.

The move comes hours after US Speaker Nancy Pelosi announced an impeachment inquiry into the US President’s controversial phone call, warning that “no one is above the law”.

Ms Pelosi said on Wednesday that Mr Trump’s actions might have “seriously violated the constitution” and she had instructed the House of Representatives’ six committees to proceed with investigations.

“The President must be held accountable,” she said.

Later on Wednesday, news website Politico and The New York Times, cited senior officials as saying the Trump administration had reversed its earlier decision to withhold the whistleblower complaint, the Inspector General report and the call’s transcript. They will be handed to Congress before the end of the week.

Apart from the crucial whistleblower complaint, the report compiled by Michael Atkinson, the current US Inspector General of the Intelligence Community who received the complaint, is also expected to shed light on Mr Trump’s controversial phone call with Ukrainian President Volodymyr Zelensky on July 25.

According to the NYT, the White House was still deliberating whether to allow the whistleblower – “whose identity remains unknown” – to meet with congressional investigators.

The still-anonymous whistleblower revealed that Mr Trump called Mr Zelensky to allegedly urge him to investigate former Vice President Joe Biden “who is currently in the running for the Democratic Party nomination in the 2020 presidential race” and Mr Biden’s son Hunter, for alleged corrupt acts linked to the Ukraine.

Mr Biden is the frontrunner to win the Democratic nomination for the 2020 presidential election.

Mr Trump also allegedly blocked nearly $400 million (A$589 million) in military aid as a way to pressure Kiev. The money was eventually transferred on September 11.

Mr Trump has admitted withholding the aid, but said it was because he wanted other European countries to contribute assistance.

“We’re putting up the bulk of the money, and I’m asking why is that?” he said, adding: “What I want, and I insist on it, is that Europe has to put up money for Ukraine also.”

He has also admitted to discussing Joe Biden, saying on Sunday: “We had a great conversation.”

Following these revelations, Ms Pelosi accused Mr Trump of betraying his oath of office, endangering the US’s national security and violating the Constitution.

Mr Trump immediately dismissed the inquiry as “Witch Hunt garbage”, backing up his view in a barrage of late-night tweets.

Secretary of State Pompeo recieved permission from Ukraine Government to release the transcript of the telephone call I had with their President. They don’t know either what the big deal is. A total Witch Hunt Scam by the Democrats!

However, soon after Ms Pelosi’s announcement, there were reports that the President’s team had sent a text to his followers, looking to raise money to help his legal team.

Later in the day, White House Press Secretary Stephanie Grisham released a statement in which she accused House Democrats of destroying “any chances of legislative progress for the people of this country by continuing to focus all their energy on partisan political attacks”.

“Their attacks on the President and his agenda are not only partisan and pathetic, they are in dereliction of their constitutional duty,” she said.

Now that Ms Pelosi has announced a formal impeachment inquiry, the investigations of the six Democrat-led House committees will be gathered under its umbrella.

The House judiciary committee will then decide if there are grounds to impeach Mr Trump. If that has majority support, the committee will draw up articles of impeachment (essentially, formal charges against the President).

These will go to the full House, which will vote on each article. If there is majority support for the impeachment, the articles will form the basis of Mr Trump’s trial in the Senate.

At that point, a two-thirds majority of the Republican-controlled Senate will have to vote in favour for Mr Trump to be convicted. If convicted, he would be removed from office.