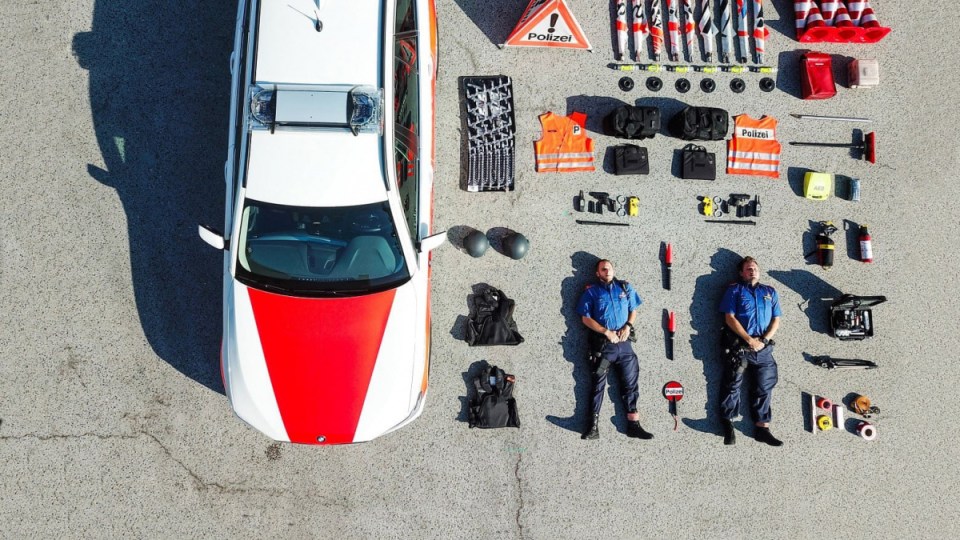 Zurich police traffic officers show off their swag in the photo that sparked the global 'Tetris Challenge.' Photo: Instagram

In the era of Marie Kondo and organising zen, the art of compartmentalising our lives in visually pleasing ways has become something of an art form.

And the world’s emergency servicemen and women, who carry around swathes of equipment to complete their daily duties, have gotten in on the act with a viral social media craze: the ‘Tetris Challenge.’

Zurich’s police department launched the challenge on September 1, with two traffic officers flat-laying all the items inside their vehicle, including cones, bulletproof vests and tyre spikes.

After Zurich's police department posted a picture where they laid out all the contents of a traffic police car, officers included, various emergency services from around the world joined in and dubbed it the "Tetris Challenge" pic.twitter.com/Y7ZQNpRxq2

The bird’s eye image, known in the photographic world as ‘knolling’, quickly garnered the attention of followers, and gained thousands of Facebook likes in hours.

Soon enough, a new viral craze was born, with emergency departments across the world endeavouring to outdo each other in the viral ‘Tetris Challenge’.

Dutch police officers thought they had an impressive array of gear, until their armed forces counterparts showed them up in remarkable fashion.

Left: the Dutch Police had a funny idea….
Right: the Dutch Armed forces thought they could do better…

It's like when you received a new box of LEGO or Playmobil as a kid…😁
#GearShow pic.twitter.com/Tztoxs9yvP

Our neighbours across the ditch also got in on the act. One New Zealand police officer was immediately up to the task following a request from an eager ‘Tetris Challenge’ fan.

One of the more popular sprawls took place in Singapore, with firefighters and ambulance officers using their newfound viral fame to remind citizens to only call them in life-threatening emergencies.

Aha… we've seen the latest online trending #TetrisChallenge where netizens from other countries get a look at their respective emergency responders' sprawl of equipment and guess what, we in The Life Saving Force simply could not resist sharing with you what we have too! By the way, remember, every non-emergency call made to 995 could delay our response to life-threatening emergencies. #995ForEmergenciesOnly 📸: Sengkang Fire Station

So in case you needed a reminder of just how much heavy lifting our emergency services do in our society – here they are, laying it all out.