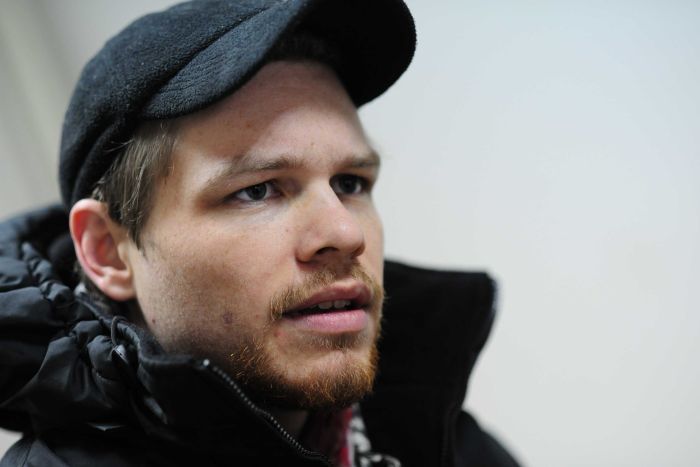 Jock Palfreeman has been granted parole after 11 years in a Bulgarian prison. Photo: Dobrin Kashavelov ABC

Bulgaria’s powerful prosecutor-general has sought to have Australian Jock Palfreeman returned to jail, amid a political firestorm over a court’s decision to free him on parole halfway through a 20-year-sentence.

The announcement came just hours after Palfreeman’s lawyer publicly warned Canberra to move quickly to “put him on the plane” out of the country, claiming he was in danger from state authorities.

Kalin Angelov said Palfreeman had signed an application to voluntarily leave Bulgaria from within the walls of the Busmantsi Detention Centre, where he has been held since Friday.

“Your authority needs to come here, take him with the car and put him on the plane,” Mr Angelov said on Tuesday morning.

Hours later, Bulgaria’s Prosecutor-General, Sotir Tsatsarov, announced he had filed a request with the country’s highest court, the Supreme Court of Cassation, to have Palfreeman’s parole revoked and his case reopened.

The legal validity of such an application is unclear.

Palfreeman was freed on parole on Thursday, after serving more than 11 years in jail over the stabbing death of local law student Andrei Monov in 2007.

But he has been held in the immigration detention facility pending the issue of a new passport, which is being processed by the nearest Australian embassy in Athens.

Now, there are real questions about whether Palfreeman will be allowed to walk free.

The announcement by Mr Tsatsarov said he had received a petition from Mr Monov’s family that argued there were legal flaws in the decision to grant him parole.

Palfreeman was visited by consular officials on Monday, but Mr Angelov said he had no information on when Palfreeman would be given his travel documents.

They would not respond to questions about whether they had issued Palfreeman with his new passport and referred the ABC to the Department of Foreign Affairs and Trade in Canberra.

DFAT has yet to respond to the ABC’s questions beyond confirming the provision of consular assistance.

“Yesterday they [the consular staff] asked me to give them a copy of the [appeals court] decision, [but] the decision is online, I showed them,” he said.

Asked what the Australian Government should be doing to assist, the solicitor warned time was of the essence.

“Somehow push more … otherwise I’m afraid they’re going to harass one of your citizens,” he said.

Palfreeman was convicted in 2009 and sentenced to two decades in jail. His attempts at appeal were unsuccessful and in 2011, Bulgaria’s highest court upheld his conviction.

Under Bulgarian law, however, inmates automatically qualify for a parole hearing once they have served half of their sentence.

In July, Palfreeman was denied parole, but last Thursday an appeals court overturned the decision and ordered he be set free.

There is currently no avenue for a further appeal, but the Monov family has announced it will seek to lodge an application to bar Palfreeman from leaving the country.

Andrei’s father, Hristo Monov, told a Bulgarian television station that Palfreeman had yet to pay about EUR 300,000 ($482,991) in compensation to the family as ordered by the court, and he should not be allowed to leave Bulgaria until the damages were paid.

He is reported to have said he would seek a retrial of the case as a means to keep Palfreeman behind bars.

“I don’t know in what legal procedure this could happen, but I will not be surprised if they choose to do something which, OK, they will explain this with some law and give it some form,” Mr Angelov said.

Hristo Monov, is an influential former politician. He declined the ABC’s request for an interview.

At a rally to protest against Palfreeman’s release in downtown Sofia, Volen Siderov, leader of the far-right Ataka, or “Attack” party, told a crowd of supporters the Australian must not be allowed to leave the country.

“If he were a Bulgarian citizen, he would be spending the rest of his life in jail,” he said.

The 32-year-old from Sydney has always rejected the charges of murder and attempted murder, saying he was acting in self-defence during the 2007 street fight in which he stabbed and killed local law student Andrei Monov.

Another man, Antoan Zahariev, received a slash wound to his torso.

In 2018, Palfreeman withdrew his application for parole after Hristo Monov, outside the Sofia Palace of Justice, warned that should he be released, Mr Monov had not forgotten “the skills” he acquired while in the military.

Palfreeman had been a thorn in the side of prison authorities. His Bulgarian Prisoners’ Rehabilitation Association has advocated for the rights of inmates, and Palfreeman has, over the past decade, made allegations of corruption in the Bulgarian prison system.

In April, the Australian went on a three-week hunger strike to protest efforts by the Government to suppress his work with the association.

“I believe in the adage that you should be the change you want to see,” he told the ABC in 2015.