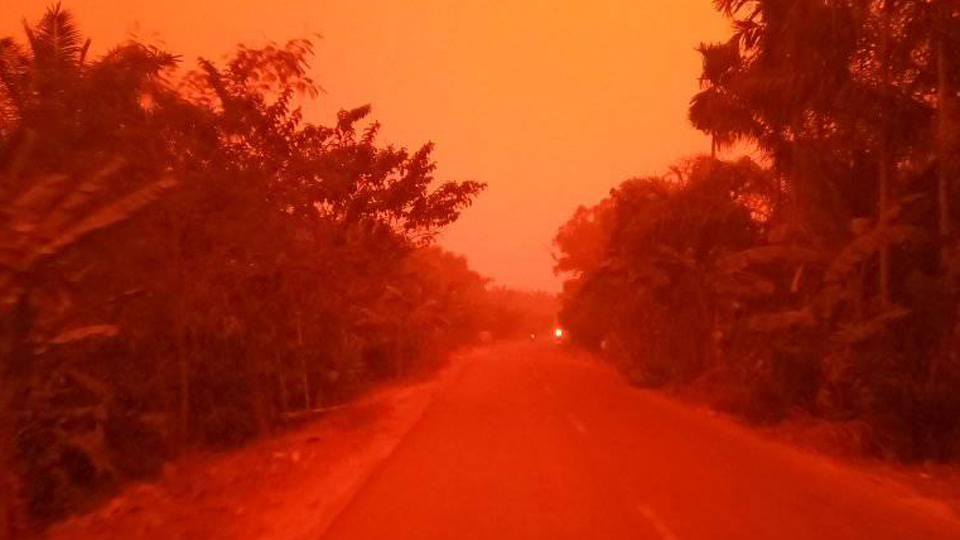 A picture posted to Facebook by Qha Caslley of the sky above Jambi on Saturday. Photo: Facebook/Qha Casliey

Horrified locals in the Indonesian province of Jambi have been sharing incredible photos and videos of bright orange and blood-red skies as widespread forest fires continue to burn across the region.

One local, who captured pictures of the sky, told the BBC the weekend haze had “hurt her eyes and throat”.

Eka Wulandari posted a series of photos taken at about midday on Saturday, when the haze was especially thick.

She told BBC Indonesia that many people online had asked if her pictures were faked.

“But it’s true. [It’s a] real photo and video that I took with my phone,” she said, adding that haze conditions remained severe on Monday.

Facebook user Qha Caslley posted her photos, saying the red skies usually started about 10am and peaked at 1pm.

“All lights along the road are turned on to make it easier for vehicles,” she said.

“There are so many people who complain [in] the community, starting [with] breathing difficulties, sore throat, sore eyes, and many more.”

Another Twitter user posted a video that also showed the red skies.

“This afternoon is not night. This is Earth, not Mars. This is not in outer space,” Zuni Shofi Yatun Nisa wrote. “We humans need clean air, not smoke.”

The blood-red skies are reportedly caused by haze from the fires rising to the upper levels of the atmosphere.

Indonesian astronomer Marufin Sudibyo told the newspapers the colour change wasn’t due to a sudden increase in temperatures.

“Rayleigh scattering happens when sunlight is dispersed by smoke, dust or airborne particles that filter shorter wavelengths and release longer wavelengths that are in the orange or red spectrum, making the area appear to be dim and red,” he said.

Mr Marufin said the density of micro- and nano-particles in the air in Jambi was much higher than in a normal atmosphere. However, the phenomenon should have no adverse effects on human vision, he said.

The smoky conditions are also being felt further afield, with neighbouring Sumatra declaring a state of emergency because of air pollution. Air quality levels there are said to be three times higher than is considered healthy.

The smog has also spread to the neighbouring nations of Malaysia, Singapore and the Philippines.

Every year, fires in Indonesia create a smoky haze that can end up blanketing the South-East Asian region. The burning usually peaks in Indonesia’s dry season, between July and October.