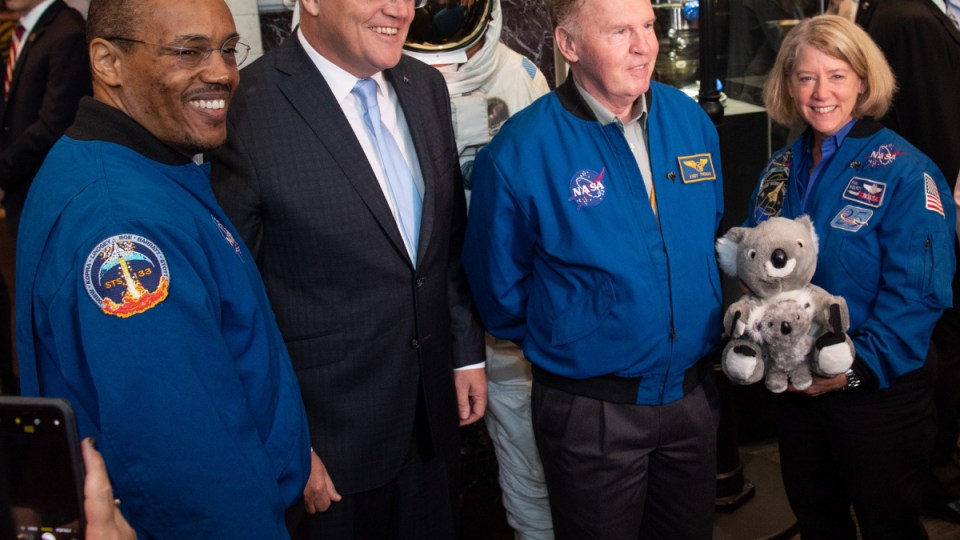 Australian astronaut Andy Thomas has expressed grave doubts about plans to return people to the moon within the next five years, saying “unrealistic” expectations could put lives at risk.

US President Donald Trump has repeatedly flagged an intention to launch a new lunar mission by 2024, using his Independence Day address in July to declare “we’re going to be back on the moon very soon”, as well as committing to planting “the American flag on Mars”.

Over the weekend, Prime Minister Scott Morrison committed $150 million towards that goal, announcing funding at NASA’s headquarters in Washington DC to help secure Australian involvement in the moon and Mars projects.

He also witnessed the new Australian Space Agency – which will be based in Adelaide – signing a joint statement of intent with NASA, that aims to expand cooperation between the two organisations.

Dr Thomas attended that event, as well as a state dinner hosted by Mr Trump, and described the announcement as a “wonderful” leap forward for Australia’s involvement in space.

However, he was sceptical about the timeline of NASA’s Artemis program.

Asked whether the five-year deadline for a return to the moon by 2024 was too soon, Dr Thomas said he thought it was “a very tight timeline”.

“I think cracking the whip over the agency and getting them moving is a very good thing,” he told ABC Radio Adelaide on Monday morning.

“But, unrealistic schedule expectations can be very dangerous in the spaceflight business and we know that from experience.

Dr Thomas participated in four spaceflights between 1996 and 2005, but said the risks involved should not be underestimated.

“Flying in space at the best of times is difficult, and flying to and landing on another planetary body such as the moon is a daunting technical challenge,” he said.

“We may have done it before, but that doesn’t mean it’s easy to do again.

“It’s going to require development of sophisticated spacecraft, sophisticated landing systems, a sophisticated human lander that can get a crew safely to the surface and return them to lunar orbit.”

In July, Johnson Space Centre chief technologist Chris Culbert told the ABC a return to the moon was technically feasible, but said it would partly depend on US Congress approving a NASA budget boost of $US1.6 billion ($A2.4 billion), on top of an approximate budget of about $US20 billion.

“Back in the ’60s during the Apollo era, they had to invent pretty much everything,” he said.

“We don’t have to start from scratch … [but] we don’t just want to go to the moon and leave a footprint this time. We’d like to stay.”

Mr Culbert said there were potential opportunities to work in collaboration with private ventures such as Elon Musk’s SpaceX program, but conceded NASA was feeling the heat.

“It’s fair to say we’re feeling some pressure. The agency is not what it was in the ’60s,” he said.

“We’re far more risk-averse than we were back then. We’ve gone through some trying periods, the Challenger and Columbia shuttle accidents both changed the way the agency looks at risk.

“We are more cautious, a little more conservative than we used to be.”

However, he has been a staunch advocate for Australia taking a greater role in space exploration, and helped Adelaide secure hosting rights for the new national space agency.

“It’s something of a paradigm shift for Australia to formally participate in human space exploration, but I think it’s tremendously exciting,” he said.

Dr Thomas accepted he would not be leaving Earth again, but said he had mixed feelings.

“I miss the experience of being in space, that’s true,” he said.

“What I don’t miss is some of the training you have to go through to get to that point.”