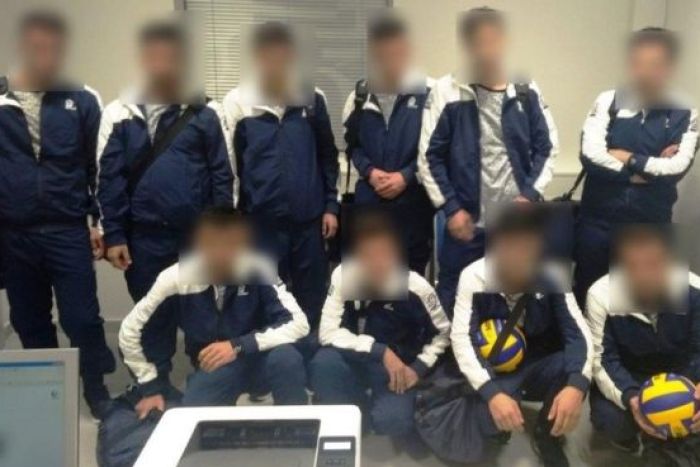 The migrants in a photo released by Greek police. Photo: Supplied

Ten migrants who dressed as a Ukrainian volleyball team to try to fly from Athens to Switzerland have been arrested by Greek police.

Officials at Eleftherios Venizelos airport in Athens alerted authorities when the passports the group provided did not correspond with the identities of the passengers.

Police later discovered that none of the 10 belonged to a sports club and that their passports had all been reported lost, stolen or expired.

The 10 sports-clad men actually came from Syria. Greek police released a picture of the group in their matching outfits, on Sunday, the day the group was arrested.

The migrants also carried matching sports bags and, for good measure, had two volleyballs with them.

Migrants carrying fake documents are stopped almost daily at Greek airports, often shortly before departing flights. In some cases, they have received help from airport employees who work with human traffickers.

The Greek arrest came as Italy granted permission for 182 migrants rescued in the Mediterranean Sea by the humanitarian ship Ocean Viking to disembark in Sicily.

The migrants had been stranded on the Norwegian-flagged ship that’s jointly operated by SOS Mediterranee and Doctors Without Borders, after Malta refused to take them in on Saturday.

A total of 262 migrants were rescued off Malta early on Saturday, the Armed Forces of Malta said, amid a major exodus of asylum seekers hoping to reach Europe from Africa.

Malta plans to host a meeting on Monday with Italy, France, Germany, the European Commission and the Finnish EU presidency to try to end EU squabbling over who takes in migrants rescued in the Mediterranean.