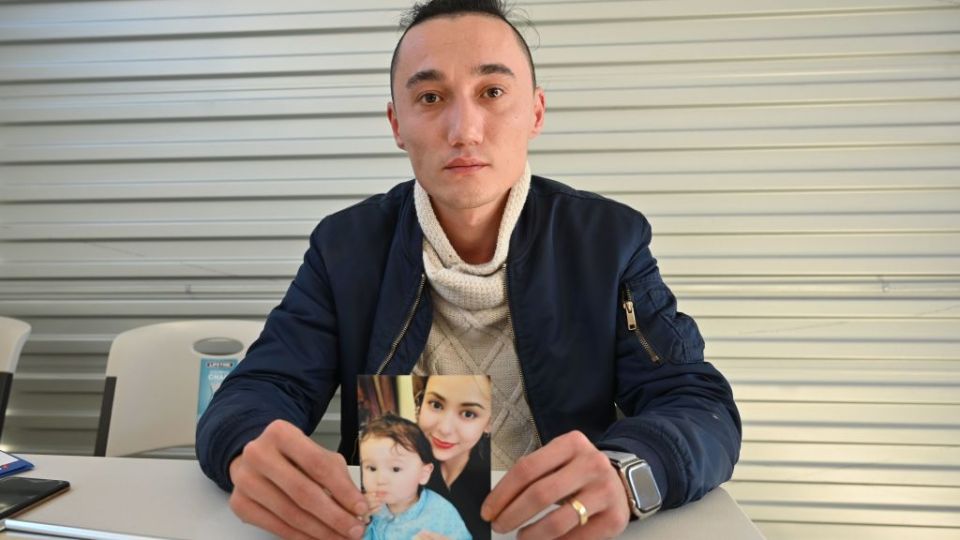 Sydney man Sadam Abdusalam holds up a photo of his Uighur wife Nadila Wumaier and their baby son Lutifeier who remain in China. Photo: Getty

The US has accused China of trying to “erase its own citizens” with its campaign against minority Uighur people of whom about 1 million are believed to be in detention.

Secretary of State Mike Pompeo has urged the world to resist China’s demands to repatriate the Muslim minority group which it accuses of terrorism.

Australia has about 3000 Uighurs, a number of whom have spoken out about their fears for family members in China.

China is under increasing international pressure for locking up and suppressing Uighurs in the western region of Xinjiang which it claims is to combat the threat of terrorism and Muslim extremism.

However Mr Pompeo rejected China’s assertions, saying:  “I want to make clear that China’s repressive campaign in Xinjiang is not about terrorism”.

Mr Pompeo accused the world’s most populous country of attempting to wipe out its own people.

“It’s about China’s attempt to erase its own citizens. …We call on all countries to resist China’s demands to repatriate the Uighurs,” he said.

US Deputy Secretary of State John Sullivan will host an event on Tuesday (local time) on the “human rights crisis in Xinjiang” in China, diplomats said.

UN experts and activists say at least a million Uighurs, and members of other largely Muslim minority groups, have been detained in camps in the remote Xinjiang region.

Human rights have also been curtailed with crackdowns on the expression of Uighur culture and Muslim faith.

The people of today's society always live under the supervision of the government with high technology.

Now we use technology to show the modern society of Xinjiang. People lose their freedom. No hope for future.

However Beijing says its detention camps are “vocational training centres” where Uighurs can undergo “re-education” in order to stamp out extremism and give people new skills.

US President Donald Trump’s administration has considered sanctions against Chinese officials, including Xinjiang’s Communist Party chief Chen Quanguo, a member of the Chinese leadership’s powerful Politburo, since last year but has held off amid Beijing’s threats of retaliation.

Mr Pompeo’s comments followed a meeting with the foreign ministers of five Central Asian countries – Turkmenistan, Kyrgyzstan, Uzbekistan, Kazakhstan, Tajikistan – in New York ahead of the United Nations General Assembly this week, during which Washington is expected to confront China over the issue.

In July Australia committed to pursuing China by co-signing a letter to the UN Human Rights Council with 22 other countries, urging Beijing to end arbitrary detention of Uighurs and other ethnic minorities.

US urges countries not to repatriate Uighurs to China