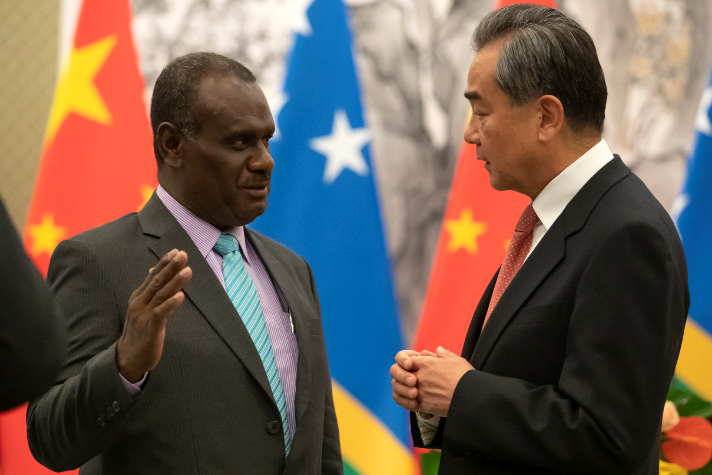 China and former Taiwan ally the Solomon Islands have established diplomatic ties in a sign of Beijing’s growing influence in the Pacific.

A top Chinese diplomat says time’s almost up for the rest of Taiwan’s friends.

In a setback for self-ruled and democratic Taiwan, which China claims as a province with no right to state-to-state ties, Beijing this week won over two previous Taiwanese allies in the Pacific – the Solomon Islands and Kiribati.

Washington, which also only has official relations with China rather than Taiwan, has watched with growing alarm China’s increasing influence in the Pacific.

In a show of displeasure, Vice-President Mike Pence has declined a request from the Solomon Islands leader to discuss development partnerships after it cut ties with Taiwan.

The Chinese government’s top diplomat, State Councillor Wang Yi, told reporters in Beijing after signing diplomatic ties with the Solomon Islands on Saturday that it was “neither reasonable nor sustainable” for them not to have formal ties.

“This was a strategic decision, a transparent decision and a natural decision,” Wang said of the Solomon Island’s decision to desert Taiwan, standing next to Solomon Islands’ Foreign Minister Jeremiah Manele at a state guesthouse in Beijing.

Wang added a warning for Taiwan, whose President Tsai Ing-wen is gearing up for re-election in January and whose government has denounced China for luring away its friends with promises of cheap aid.

“China must and will be reunified. Factually and legally, Taiwan island has been and will always remain an inalienable part of China’s territory.

This status will not change, and is impossible to change,” Wang said.
Taiwan now with formal relations with just 15 countries, mostly small and poor nations in Latin America and the Pacific, including Nauru, Tuvalu and Palau.

“Now, there are only a handful of countries who have not yet established diplomatic relations with China. We believe more and more visionary people in these countries will speak up for justice in keeping with the overriding trend of the times,” Wang said.

Both the Solomon Islands and Kiribati are small and developing nations, but they lie in strategic waters that have been dominated by the United States and its allies since the Second World War.

China routinely denies offering easy cash and loans in return for recognition, which Taiwan has repeatedly accused Beijing of doing, but said this week that both Kiribati and the Solomon Islands would have “unprecedented development opportunities” with China by their side.

“Solomon Islands’ decision to establish relations with the People’s Republic of China is based on our national interests,” Manele said.

“The development challenges of my country are huge. We need a broader partnership with everyone, including the People’s Republic of China.”

Neither Wang nor Manele took questions.

Kiribati said it acted in its best national interest when it severed ties with Taiwan and re-established diplomatic relations with China.

Kiribati is the seventh country to drop Taiwan as a diplomatic ally since 2016 when Tsai took office, following Burkina Faso, the Dominican Republic, Sao Tome and Principe, Panama, El Salvador and the Solomon Islands.