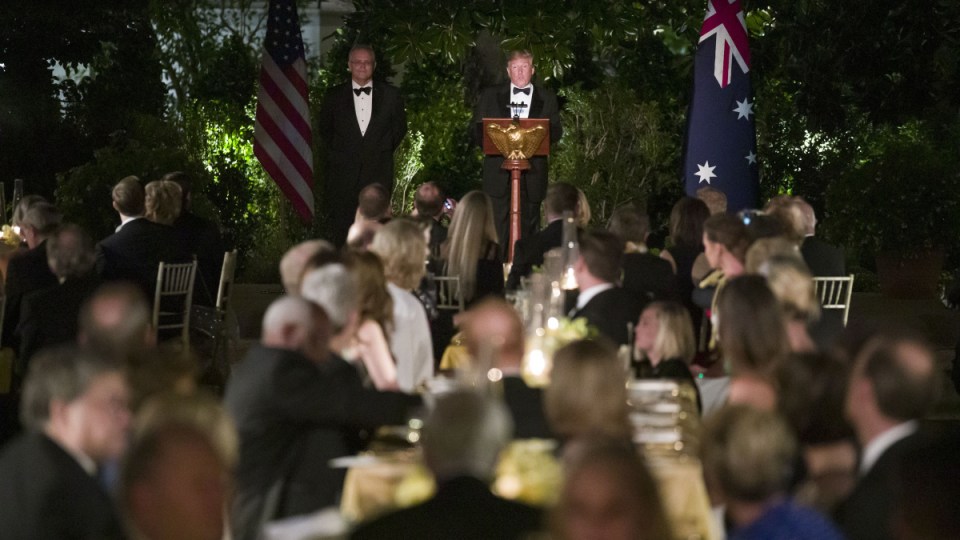 Under the stars on a warm Washington night, Donald Trump and Scott Morrison will be softly serenaded by a string ensemble as they sit down to a lavish feast.

The venue for the state dinner, the White House Rose Garden, is smaller than you might imagine.

It’s an intimate setting that, in another context, could almost be described as romantic.

Perhaps it will prove the perfect place to take the next step in a relationship both the President and Prime Minister seem keen to portray as a budding bromance.

The first course is “sunchoke ravioli” with Reggiano cream and shaved summer vegetables.

According to the White House, it’s an “earth apple” native to North America that will be “roasted and pureed to give creaminess and sweet notes to the ravioli”.

The dish will then be topped with a “lemony Parmigiano-Reggiano cheese emulsion”, an adornment that seems a fitting tribute to the Commander-in-Chief, a brash businessman who built a brand on golden embellishments.

The main will feature Dover sole, a type of bottom-dwelling fish, and notes of green herb will apparently “heighten the anise flavour of the Fennel Mousseline”.

Trump hasn’t always been so fancy

The fairly small, yet classy, affair is all a little at odds with Mr Trump’s previous, differing views about how US state dinners should look.

Years ago, the real estate tycoon, who often expresses a particular interest in crowd sizes, had a vision of building a big, beautiful White House ballroom to hold such affairs.

Then, when he was a presidential candidate in 2016, he seemed to have lost interest in the concept entirely, preferring a menu from the nearest takeaway joint.

“We shouldn’t have dinners at all,” he said.

“We should be eating a hamburger on a conference table.”

Tonight, the Rose Garden will be filled with American varieties of yellow and white roses, place settings will feature historic china from Administrations past, and America's premier military musicians will entertain!

A night to remember: https://t.co/xp02zvwapM

Fortunately for Mr and Mrs Morrison, dinners are not strictly Mr Trump’s domain.

Melania Trump, the first lady, has carriage of this formal affair.

Diet Coke is out – Napa Valley sauvignon blanc with “bright floral aromas” is in.

The colours, or colors, of the event are mostly green and gold in honour of Australia.

The dinner centrepieces feature more than 2500 roses from California and our national floral emblem, the golden wattle, that will be placed in “gold woven baskets to signify the combined friendship” of Australia and the USA.

The music promises to be majestic.

A mass of military bands, including “The President’s Own” United States Marine Chamber Orchestra, will play the night away.

Table for two countries:  Audience of one

So what will our leader, a self-described “daggy dad”, champion of the so-called “quiet Australians”, make of all this pomp and circumstance?

On a media preview, it was obvious to even the most cynical scribes that the United States is really rolling out the red carpet.