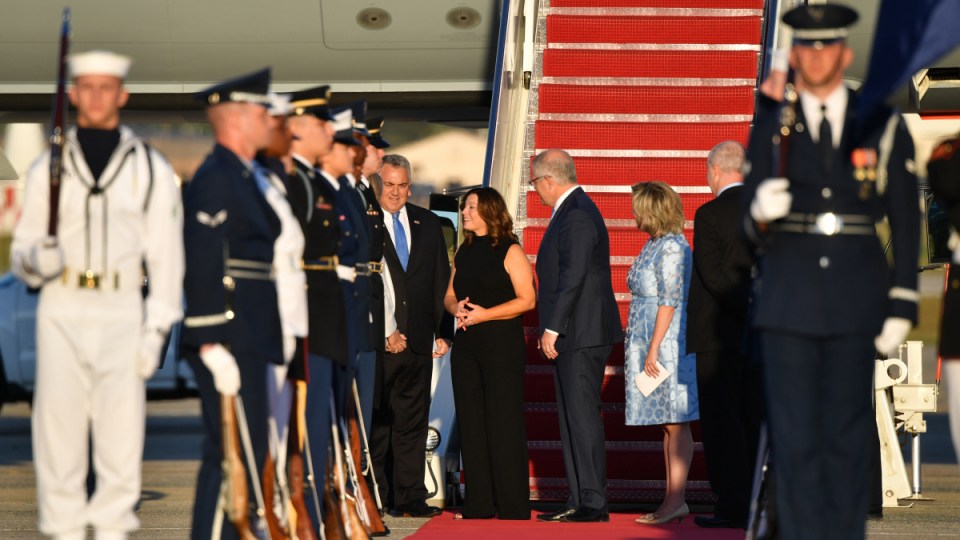 Prime Minister Scott Morrison has landed in Washington ahead of a meeting with US President Donald Trump, ready to celebrate the centenary of the alliance between the two nations.

His Royal Australian Air Force jet, dubbed ‘Shark One’, touched down at Andrews Air Force Base on Friday about 8.15am (AEST).

Among the welcome party were Australia’s ambassador to the US Joe Hockey and the US Chief of Protocol Cam Henderson, who greeted Mr Morrison and his wife Jenny as the Air Force band played the national anthems, Advance Australia Fair and the Star-Spangled Banner.

“There are no two anthems that you’ll hear anywhere in the world when played together that talk about freedom and liberty and all the things we hold dear as Australians,” Mr Morrison told reporters.

The highlight of the week-long trip will no doubt be an opulent outdoor White House state dinner in the Rose Garden, hosted by Mr Trump and First Lady Melania, and is expected to be attended by golfing great Greg Norman and media mogul Rupert Murdoch.

Melania’s staff were busy with preparations for the dinner, decking the Rose Garden with green and gold, with yellow garden roses, wattle and golden champagne grapes decorating the tables.

The 100 or so guests will dine from china settings commissioned by Bill Clinton and George W Bush.

The menu of sunchoke ravioli, Dover sole with fennel mousseline, and Lady Apple tart was chosen to “pay homage to Australia’s special blend of culinary adaptations from its various cultures, not unlike the diverse food traditions of the United States,” a spokesperson for Mrs Trump said.

John Howard was the last Australian prime minister feted at a White House State dinner in 2006.

Mr Morrison took to Instagram to announce his arrival, thanking “his friend” Mr Trump for their warm welcome, happy to be in the “land of the free”.

G’day USA. The Aussies are here. Wonderful to be here in the land of the free and home of the brave. Special thanks to my friend @realdonaldtrump and the First Lady for their warm invitation and welcome.

Mr Morrison’s schedule begins later on Friday local time when the Trumps will greet the Morrisons at the White House’s South Lawn at 9am Washington DC time (11pm Friday AEST) for a 30-minute ceremony.

They will then take the Morrisons to a guestbook signing and the couples will exchange gifts. The four will then head to the Oval Office for a meeting before a series of bilateral meetings between the president, prime minister and their staff.

High on the agenda will be Australia’s role in helping America combat Chinese expansion in the Indo-Pacific and Iranian aggression in the Middle East.

The visit will include the signing of a memorandum of understanding involving Australia assisting the US to return to the moon and a joint plan on rare earths and critical minerals.

“We are going to have some announcements on a MOU between NASA and the Australian Space Agency on returning to the moon by 2024 and to explore new areas of mutual interest in things like automation and robotics,” the official said.

A plan will also be announced on improving the “security and supply of rare earths in a way that is mutually beneficial to both countries”.

US Secretary of State Mike Pompeo will return to Washington DC after a emergency trip to the Middle East following the recent missile attack on a Saudi Arabian oil facility.

Mr Pompeo will host a lunch with Vice President Mike Pence for Mr Morrison on Friday local time at the White House.

“Australia has been a tremendous partner for us as it relates to Iran’s nuclear program and toward some of the challenges we face with Iran,” the official said.

“They have recently announced they will be joining patrols with the US in the Strait of Hormuz to ensure freedom of navigation in the strait.”

Mr Morrison is also keen to underscore Australia’s role as a reliable ally who pulls its weight, noting he had been advised years ago that the best way to celebrate anniversaries was not by marking the years but by investing in and tending relationships.

“There are many larger, I suppose, more powerful friends that America has, but they know that they do not have a more sure and steadfast friend than Australia,” he said.