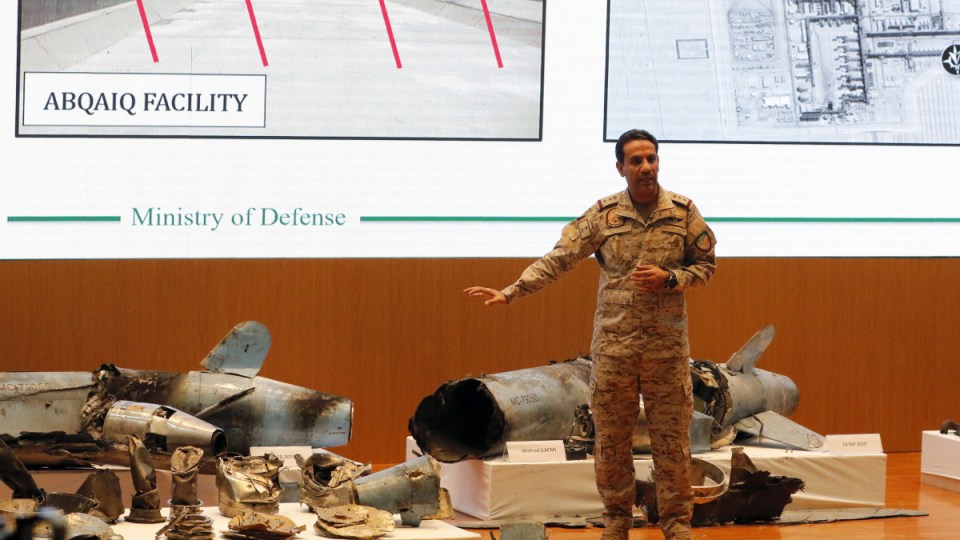 Saudi Arabia has showcased the wreckage of drones and cruise missiles that struck its oil fields as the US ordered more sanctions against Iran and declared the attack an “act of war”.

“The attack was launched from the north and unquestionably sponsored by Iran,” he told a news conference on Wednesday.

“The evidence … that you have seen in front of you, makes this undeniable.”

Saudi Arabia and the US continue to point the finger at Iran and have rejected claims the attack was by Iran-aligned Houthi rebels in Yemen who have claimed responsibility.

US secretary of State Mike Pompeo said the air strikes were an “act of war” and “a scale we’ve just not seen before”.

Mr Pompeo said the damaged weapons were not Houthi arsenal.

“These line attack cruise missiles we have never seen there and we think we’ve seen most everything,” he said.

“So the intelligence community has high confidence that these were not weapons that would have been in the possession of the Houthis. That’s probably the most important piece of information.”

US President Donald Trump announced he would order an increase in sanctions on Iran which is already under heavy sanctions after the US pulled out of a nuclear pact.

Mr Trump said the sanctions would be announced in 48 hours as he told reporters the US would take action “without hesitation”.

“If we have to do something, we’ll do it without hesitation.”

Iran has heatedly denied any involvement and has threatened a crushing response to any military strike.

“We don’t want conflict in the region … Who started the conflict?” he added, blaming Washington and its Gulf allies for the war in Yemen.

In a letter sent to the US via the Swiss embassy, which represents US interests in Iran, Tehran said it “denies and condemns the claims”.

“It was also emphasised in the letter that in case of any aggression against Iran, that action will face an immediate response from Iran and the response won’t be limited to its source,” the state news agency IRNA reported.

Saudi Arabia’s Crown Prince Mohammed bin Salman said the hit on the world’s biggest crude exporter was a “real test of the global will” to confront subversion of the international order.

“We’re trying not to react too quickly because the last thing we need is more conflict in the region,” he added.

France, which is trying to salvage an international nuclear deal with Iran that Washington quit last year, said it wanted to establish the facts before reacting.

Saudi Arabia said on Tuesday that more than half of its oil production, knocked out by the attacks, had been recovered and that production capacity at its targeted plants would be fully restored by the end of September.