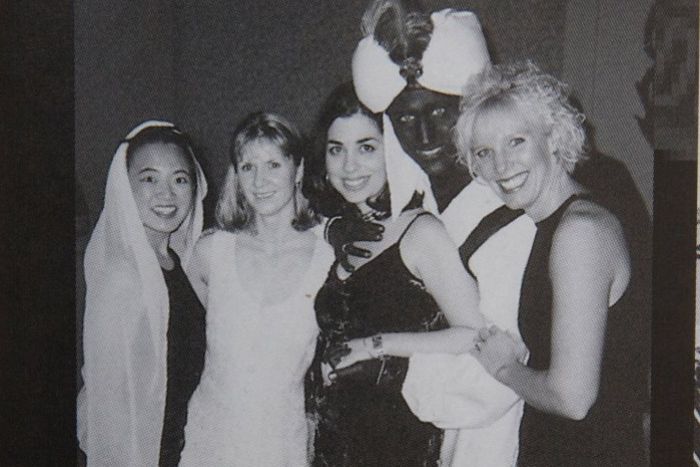 The photo of the Canadian Prime Minister was taken at an Arabian Nights-themed party in 2001. Photo: Time

Canadian Prime Minister Justin Trudeau says he “should have known better” than to wear brownface to a 2001 costume party.

An embarrassing picture of a 29-year-old Mr Trudeau with his face in dark make-up has emerged less than five weeks before an election in which he faces a tough fight.

Time magazine posted the photo, which it said was published in the yearbook from the West Point Grey Academy, a private school in British Columbia where Mr Trudeau worked as a teacher before entering politics.

The photo shows him Mr Trudeau wearing a turban and robe, with dark makeup on his hands, face and neck.

It presents a major challenge for a leader who often speaks about the need to fight racial discrimination and who has three prominent ministers of Indian descent in his cabinet.

On Thursday, Mr Trudeau said he regretted doing “something that I shouldn’t have done”.

“I think I deeply regret that I did that. I should have known better. But I didn’t,” he said.

Time said the image was provided by Vancouver businessman Michael Adamson earlier in September. Mr Adamson was part of the West Point Grey Academy community where Mr Trudeau worked at the time, the magazine said.

“I dressed up in an Aladdin costume and put make-up on. I shouldn’t have done it,” Mr Trudeau said in comments carried live on Canadian television.

Liberal Party spokesman Cameron Ahmad confirmed the photo was of Mr Trudeau. He said it was taken at the school’s annual dinner, which had an Arabian Nights theme that year.

Mr Trudeau, questioned by journalists, also admitted he had dressed up in make-up when at high school and performed Day O, a traditional Jamaican song about people loading bananas onto boats.

The PM is locked in a tight battle with Conservative leader Andrew Scheer ahead of Canada’s October 21 federal election.

Mr Scheer said he was “extremely shocked and disappointed” by the photo.

Last month, Mr Trudeau became the first Canadian prime minister found to have broken federal ethics rules, after a watchdog delivered a scathing inquiry into his attempts to prevent a corruption trial from going ahead.

Mr Trudeau, who swept to office in November 2015 promising “sunny ways” and stressing the importance of gender equality and the environment, faces an electorate more focused on the economy and affordability when it votes on October 21.