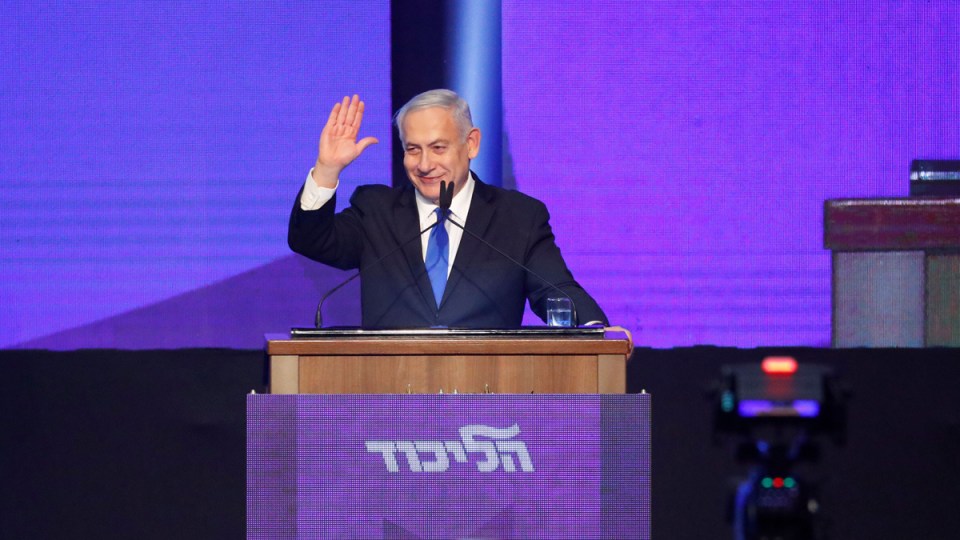 Benjamin Netanyahu has vowed to form a ruling coalition after his party failed to secure a majority. Photo: Getty

Benjamin Netanyahu has vowed to form a ruling coalition after his right-wing Likud party failed to secure a majority in Israel’s general elections.

But the acting prime minister told his followers the new government could not depend on Arab parties.

Singling out the United States and its president, Donald Trump, Mr Netanyahu said Israel was at a historical juncture ahead of great security and diplomatic challenges and opportunities.

“Negotiations with Trump will decide Israel’s future for decades, so Israel needs a strong, stable and Zionist government,” he said.

“There won’t and cannot be a government supported by anti-Zionist Arab parties who deny the existence of Israel as a Jewish and democratic state, who glorify bloodthirsty terrorists who murder our soldiers.”

Potential right-wing coalition partners have already been contacted, Mr Netanyahu said, and Likud could partner with its main rival at the recent election, the moderate Kahol Lavan (Blue and White) alliance led by Benny Gantz.

Trump, when asked about close Israeli election and Netanyahu’s future: “Our relationship is with Israel.”

Exit polls appeared to show Netanyahu failing to garner enough seats for a government coalition with his traditional right-wing and ultra-Orthodox partners unless he can convince former defence minister and hardline hawk Avigdor Lieberman to join.

Lieberman, who is leader and founder of the ethno-nationalist Yisrael Beiteinu – Israel Our Home – party, has until now rejected being part of any executive that doesn’t represent Jewish fundamentalists.

On Tuesday night, however, he changed his tune.

“We have only one option: a broad liberal unity government including Yisrael Beiteinu, Likud and Kahol Lavan,” he said in a speech at his party’s headquarters.

Meanwhile, Gantz expressed his satisfaction with the results predicted by exit polls, as Kahol Lavan was forecast to earn more seats in the Knesset than Likud.

He said that Netanyahu apparently would be unable to cobble together a coalition with his traditional partners.

Instead, Gantz offered to form a national unity government and said he had already reached out to the heads of the two centre-left Zionist parties, the Labor party and the Democratic Union.

Mr Netanyahu failed to form a coalition government in May in the wake of the first general elections, forcing the most recent round of voting.