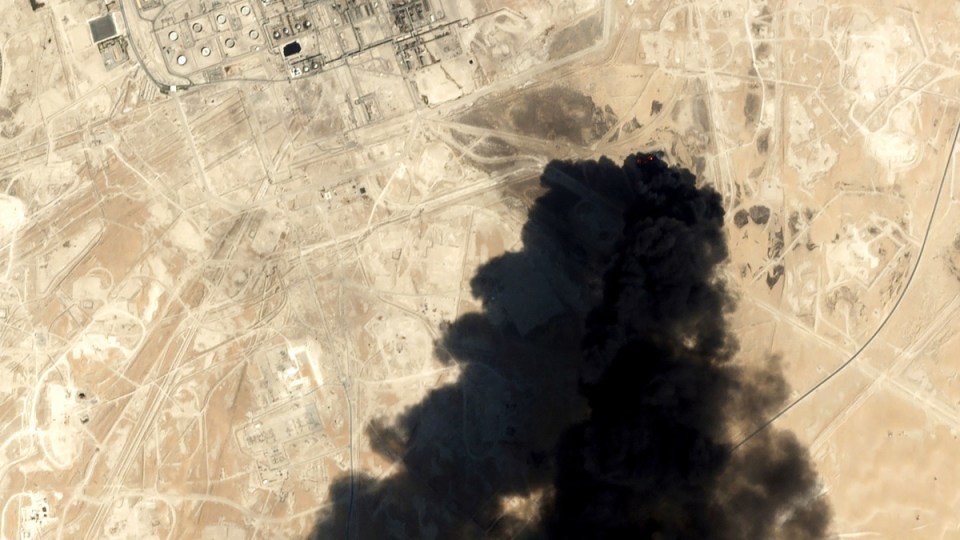 US President Donald Trump says military action is not yet on the table in response to an attack on Saudi Arabian oil facilities, for which Washington has blamed Iran.

But Mr Trump put the brakes on any talk of quick military action – despite earlier describing the US as “locked and loaded”. He also said the oil impact would not be significant on the US, which is a net energy exporter.

The Saudi government called the attack an “unprecedented act of aggression and sabotage” but stopped short of directly pinning blame on Iran.

US Secretary of State Mike Pompeo immediately blamed Iran for “an unprecedented attack on the world’s energy supply.”

Mr Trump is alternating between aggressive and nonviolent reactions, saying the US could respond “with an attack many, many times larger” but also “I’m not looking at options right now”.

He described it as an attack against Saudi Arabia, “not us”.

The Fake News is saying that I am willing to meet with Iran, “No Conditions.” That is an incorrect statement (as usual!).

On Tuesday, American officials released satellite images of the damage at the heart of Saudi Arabia’s crucial Abqaiq oil processing plant and a key oil field.

The US alleges the pattern of destruction suggested the attack did not come from neighbouring Yemen, as claimed by Iranian-backed Houthi rebels there.

The Saudis invited United Nations and other international experts to help investigate, suggesting there was no rush to retaliate.

The new violence has led to fears of an escalated confrontation in the wider Persian Gulf in recent months. There have already been attacks on oil tankers that Washington blames on Tehran, and the downing of a US military surveillance drone by Iran.

Those tensions have increased since Mr Trump pulled the US out of a 2015 global nuclear agreement with Iran and re-imposed sanctions that have sent Iran’s economy into freefall.

An Iranian government spokesman said there was “absolutely no chance” of a meeting between Iranian President Hassan Rouhani and Mr Trump at the UN General Assembly next week.

Mr Trump’s language since Saturday has alarmed the Australian opposition.

“You can’t be anything other than anxious when you hear that kind of language,” Deputy Opposition Leader Richard Marles told ABC Radio on Tuesday.

“I would note that there seems to have been a walking back from the brink in terms of the language of both sides overnight.”

Treasurer Josh Frydenberg has called for calm in response to the rising tensions, urging the Australian business community not to overreact.

Mr Marles pointed out the US President was no stranger to using strong language, having launched similar rhetorical missives against the North Korean leader in the past.

“I think the difference between rhetoric and action can be a big difference,” he said.

“But there’s no doubt that when you hear that kind of language, which feels like it very much is on the brink, it’s obviously a source of anxiety.”

Any military confrontation between the US and Iran could disrupt global oil supplies and spark fuel shortages in Australia.

Energy Minister Angus Taylor has said there is no immediate threat to Australia’s fuel stocks after the weekend’s attacks, with 90 days worth of reserves.

US holds off military action after oil hit