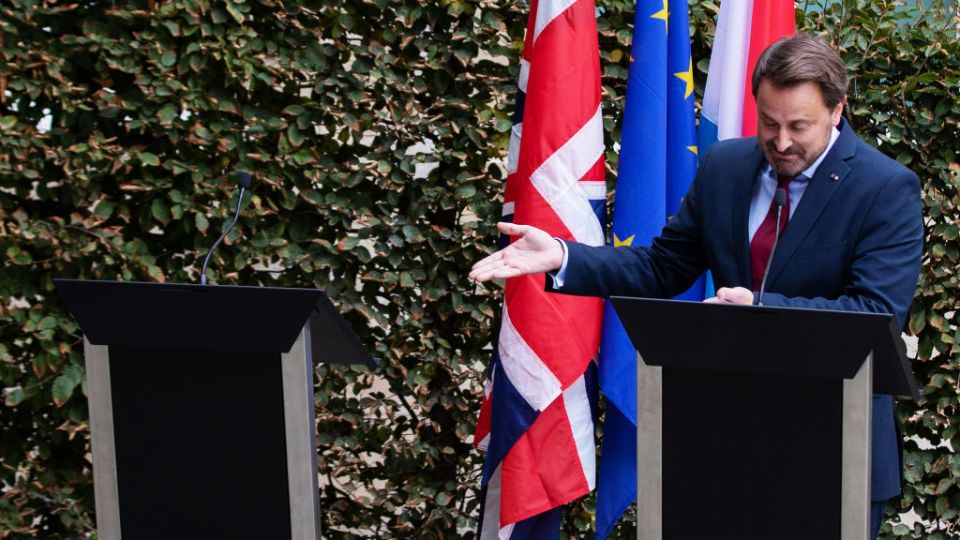 Boris Johnson has performed an embarrassing vanishing act from a press conference with Luxembourg’s leader to avoid a group of protesting British retirees.

Luxembourg’s Prime Minister Xavier Bettel seized the opportunity to  excoriate the UK leader over the Brexit mess, pointedly gesturing to the empty podium.

British officials had requested the media conference be held indoors to avoid the jeering group but Mr Bettel chose to go ahead with it anyway.

Referring to the empty podium, which was kept in place rather than removed to avoid humiliating Mr Johnson, the Luxembourg leader made pointed remarks about the Brexit “nightmare”.

“So now it’s on Mr Johnson, he holds the future of all the UK citizens and every EU citizen living in the UK in his hands,” he said.

“It’s his responsibility. Your people, our people count on you. But the clock is ticking – use your time wisely.”

Mr Johnson was in Luxembourg for his first face-to-face talks with the European Union president Jean-Claude Juncker whom he joined for lunch at the Bouquet Garni restaurant.

Outside the restaurant, dozens of Britons – many of them retirees living in Luxembourg – booed, chanted and held banners.

The crowd and the booing swelled to about 50 protesters when he went on to meet Mr Bettel.

They cried chants of “Fascist!”, “Stop the coup! Tell the truth!” and “Shame on Boris”, playing bursts of music that included the EU’s Ode to Joy anthem and I Can’t Get No Satisfaction.

Mr Johnson later said he chose to leave the joint press conference early because it wouldn’t have been fair on the Luxembourg prime minister with that noise.

Mr Bettel urged his counterpart to “stop speaking and act”, and to stop trying to pass the blame to the EU.

“Our people need to know what is going to happen to them in six weeks time,” he said.

“They need clarity, they need certainty and they need stability. You can’t hold their future hostage for party political gains,” he said to applause and loud cheers from the protesters.

With less than seven weeks until the October 31 Brexit deadline, Mr Johnson has yet to reach an agreement with Brussels on how to manage the separation.

A sticking point remains the ‘backstop’ issue relating to the Irish border.

Mr Johnson has reiterated that Britain would leave the European Union on its October 31 divorce date, deal or no deal, and would not request a delay.

We should be so much more positive about the UK and what we can do. I want us to get this thing done. 🇬🇧#LeaveOct31 pic.twitter.com/XqLpkizEia

Meanwhile actor Murk Ruffalo has reacted to Mr Johnson’s earlier comments comparing the UK to the Incredible Hulk, breaking out of the EU.

“Banner might be bound in manacles, but when provoked he would explode out of them…” Mr Johnson said in an interview with The Mail on Sunday.

“Hulk always escaped, no matter how tightly bound in he seemed to be – and that is the case for this country. We will come out on October 31 and we will get it done.”

However the man who has played the angry green super hero in numerous instalments pointed out that Hulk was a team player “and is a disaster when he is alone”.

Ruffalo tweeted that the super hero “only fights for the good of the whole”.

“Mad and strong can also be dense and destructive,” he added.