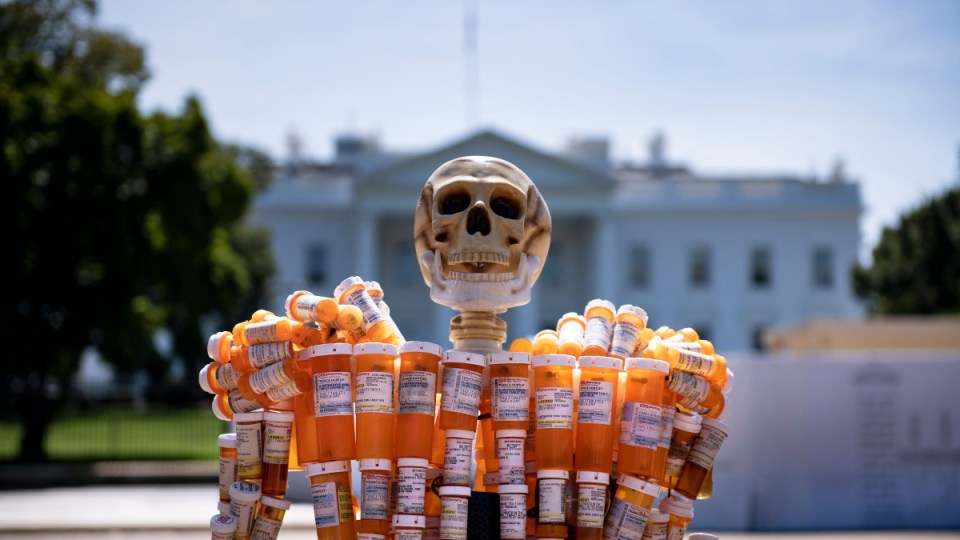 Pill Man, a skeleton made from one man's oxycontin and methadone prescription bottles, is seen on Pennsylvania Avenue in front of the White House. Photo: Getty

OxyContin maker Purdue Pharma LP has filed for bankruptcy protection in New York, succumbing to pressure from more than 2,000 lawsuits alleging the company helped fuel the deadly US opioid epidemic.

Purdue’s board met on Sunday evening to approve the long-expected bankruptcy filing, which the company is pursuing to restructure under terms of a proposal to settle the widespread litigation.

Purdue reached a tentative deal to resolve lawsuits with 24 states and five US territories, as well as lead lawyers for more than 2,000 cities, counties and other plaintiffs, the company said.

Two dozen states remain opposed or uncommitted to the proposed settlement, setting the stage for contentious legal battles over who bears responsibility for a public health crisis that has claimed the lives of nearly 400,000 people between 1999 and 2017, according to the latest US data.

Thousands of cities and counties, along with nearly every state, have sued Purdue and, in some cases, its controlling Sackler family.

The lawsuits, seeking billions of dollars in damages, claim the company and family aggressively marketed prescription painkillers while misleading doctors and patients about their addiction and overdose risks.

Purdue and the Sacklers have denied the allegations.

Opposing states, including Massachusetts, New York and Connecticut, want the Sacklers to guarantee more of their own money will go toward a settlement, and have questioned Purdue’s calculations valuing the overall deal at more than $US10 billion ($A15 billion).

The Sacklers, who would cede control of Purdue in the proposed settlement, have offered $3 billion in cash and an additional $1.5 billion or more through the eventual sale of another company they own, called Mundipharma, according to the company and people familiar with the terms.

The Sacklers have declined to revise their offer.

“This is the fork in the road. There are only two ways to go from here,” said Purdue Chairman Steve Miller in an interview with Reuters.

Miller said Purdue plans to argue to opposing states that fighting the proposed settlement will likely result in protracted litigation, increasing legal fees and depleting value that could be steered to US communities reeling from opioid abuse.

He described bankruptcy proceedings as the “best hope for finalising and implementing a global resolution to this litigation”.

In a statement, members of the Sackler family controlling Purdue said they hoped those opposing the current settlement offer would eventually change their minds.

“It is our hope the bankruptcy reorganisation process that is now underway will end our ownership of Purdue and ensure its assets are dedicated for the public benefit,” the family said.

The outcome of Purdue’s attempted bankruptcy reorganisation and settlement negotiations will help determine how much money US communities receive from the company and the Sacklers to address harm from opioids.

A reorganisation and settlement would ultimately need to be approved by a US bankruptcy judge.

States opposing the settlement offer have vowed to fight attempts by Purdue and the Sacklers to use bankruptcy proceedings to contain the litigation.