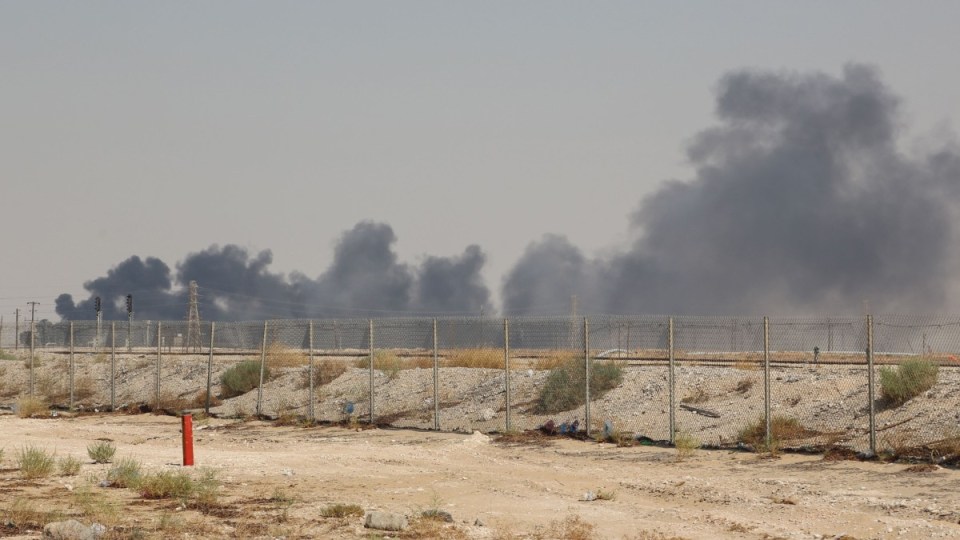 Iran has rejected US claims it was responsible for the attacks on critical oil facilities. Photo: Getty

The US has blamed Iran for attacks on two Saudi oil facilities which could cause a significant spike in global energy prices.

Yemen’s Houthi group claimed responsibility for the drone-delivered attacks on the Abqaiq oil processing plant and Khurais oil field, but US Secretary of State Mike Pompeo rejected those claims.

Instead, Mr Pompeo said the Houthi-allied Iran is the most likely culprit behind the attacks, which knocked out half of Saudi oil output – approximately 5 per cent of global supply.

“Amid all the calls for de-escalation, Iran has now launched an unprecedented attack on the world’s energy supply,” he said.

Iranian foreign ministry spokesman Abbas Mousavi quickly dismissed the US allegation as “pointless”, but a senior Revolutionary Guards commander warned that the Islamic Republic was nevertheless ready for “full-fledged” war.

“Everybody should know that all American bases and their aircraft carriers in a distance of up to 2000 kilometres around Iran are within the range of our missiles,” the semi-official Tasnim news agency quoted commander Amirali Hajizadeh as saying.

“Because of the tension and sensitive situation, our region is like a powder keg,” he warned.

“When these contacts come too close, when forces come into contact with one another, it is possible a conflict happens because of a misunderstanding.”

US administration officials say the scope and precision of the attacks show they were launched from a west-northwest direction rather than from Yemen to the south.

They pointed to satellite imagery showing 19 points of impact on the oil facilities.

The officials said they had additional evidence they would reveal in the days to come that would show that Houthi claims of responsibility for the attacks were not credible.

Both the US and Riyadh have previously blamed Iran for attacks on oil production assets in the region, and Saudi officials have long accused Iran of arming Yemen’s Houthi rebels in their conflict against Saudi forces.

Iran and the Houthi rebels both deny any such arms supply arrangement exists.

There was no immediate impact on global oil prices from the attacks as markets were closed for the weekend but analysts anticipate a spike in oil prices when markets reopen on Monday.

State oil giant Saudi Aramco is the world’s biggest oil producer and the attack cut output by 5.7 million barrels per day at a time when Aramco is trying to ready itself for what is expected to be the world’s largest share sale.

Aramco gave no timeline for output resumption but said early on Sunday it would give a progress update in around 48 hours.

A source close to the matter told Reuters the return to full oil capacity could take “weeks, not days”.

Traders and analysts said crude may spike to as high as $US100 ($145.50) if Riyadh fails to quickly bring back supply.

However Federal energy minister Angus Taylor has downplayed the risk of potential pain for Australian motorists.

“There are ample commercial stocks globally, and that’s the key to making sure that this is as manageable as possible and that the impact is minimised.”

The kingdom, the world’s top oil exporter, ships more than 7 million barrels of oil to global destinations every day. Aramco told one Indian refinery that it would deliver crude from other sources and had adequate inventory, a refinery source said.

Riyadh said it would compensate for the loss by drawing on its stocks which stood at 188 million barrels in June, according to official data.

The US said it was also ready to tap emergency oil reserves if needed.