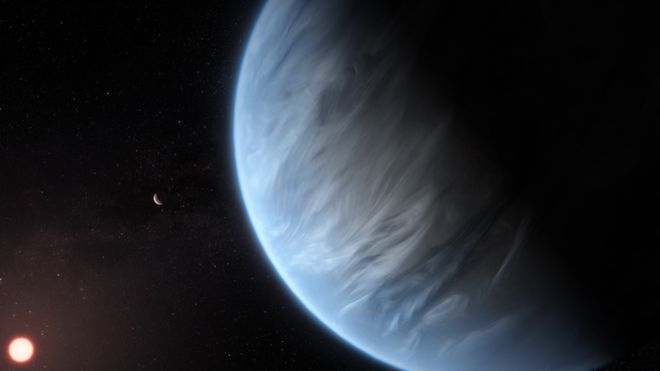 The K2 18b 'super earth' planet is the first located in the so-called Goldilocks zone that has been discovered to have water. Photo: University of College London

Astronomers have made the “mind-blowing” discovery of a habitable far-distant planet that could contain alien life.

For the first time, water has been detected in the atmosphere of a planet that orbits within the “habitable zone” of its sun.

The “super-earth” named K2-18b is outside our solar system, about 111 light years away (or 1046 million million kilometres) and is just over twice the size of earth.

It has two key ingredients conducive to life as we know it – a comfortable temperature range of between zero and 40 degrees celsius and water, with scientists estimating its atmosphere could be 50 per cent H20.

But the burning question as to whether the planet contains any form of life cannot be answered until the next generation of telescopes are deployed into outer space in coming years.

A team of astronomers studied images collected by the Hubble Telescope in 2016 and 2017 and used algorithms and computer modelling to determine the make-up of K2 -18b’s atmosphere.

When future telescopes are launched from 2020, the researchers will be able to take a closer look to determine whether there is any actual evidence of alien life.

Rather than an E.T-style life form, telltale signs of living creatures could include the presence of gases that could have been produced by microscopic organisms.

The exciting breakthrough was published in the scientific journal Nature Astronomy.

Added astronomer Angelos Tsiaras: “This is the only planet right now that we know outside the solar system that has the correct temperature to support water, it has an atmosphere, and it has water in it—making this planet the best candidate for habitability that we know right now.

“Of course, K2-18b is not a second earth, because it is a planet that is much bigger, has a different atmospheric composition. It’s orbiting a completely different star, so it doesn’t look like earth,” he said.

“The search for habitable planets, it’s very exciting, but it’s here to always remind us that this (earth) is our only home and it’s probably out of the question if we will be able to travel to other planets.”

The potential for life on another planet – albeit life in the form of micro-organisms and bacteria – would be a paradigm shift for humanity, according to scientists.

It would answer the fundamental human enquiry as to whether we are alone in the vast universe.

Although there have been previous discoveries of planets with water or frozen water, this is the first time the planet has resided in the so-called Goldilocks zone near its sun.

Using #Hubble data, @UCL astronomers detected water vapour in the atmosphere of K2-18b, making it the only #exoplanet known to have both water & temperatures that could support life. Artist's impression by @ESA /Hubble, M. Kornmesser https://t.co/rmp1SRjfkw pic.twitter.com/nS49K5N8IC

Within the next ten years, scientists hope to examine closer the planet’s properties when new telescopes are deployed into the far reaches of the universe.

Nasa’s James Webb Space Telescope (JWST), due for launch in 2021, and the European Space Agency’s Ariel mission seven years later, will enable astronomers to study in detail the atmospheres of the varied worlds that have been detected so far, the BBC reports.

First discovery of water on habitable ‘super- Earth’ but is there alien life?