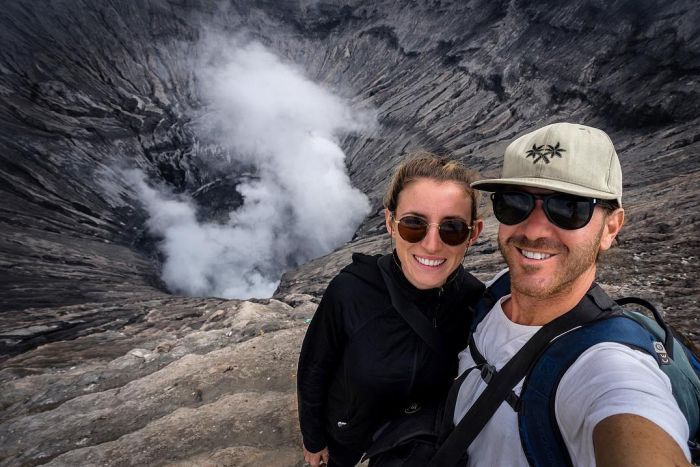 Perth residents Mark Firkin and Jolie King have been named as the Australian couple detained in Iran.

The federal government has confirmed that Ms King and Mr Firkin are being held in the notorious Evin prison in Tehran, with consular assistance being provided to their families.

The couple were reportedly arrested about 10 weeks ago for flying a drone without a licence.

They have been globetrotting since 2017, documenting their travels under the user name The Way Overland on YouTube and to nearly 20,000 followers on Instagram.

On a crowd-funding page, Mr Firkin and Ms King described their “life-changing adventure” as an escape from the daily corporate grind.

Mr Firkin is reportedly a construction manager while Ms King is a building designer. They met about 2012 and moved from NSW to Perth in 2015.

The couple were driving overland from Australia to London in a converted LandCruiser. They had started their journey in Timor Leste, using ships and ferries to transport their vehicle over water.

Once in Asia, their intended route was from Iran to Turkey, and then into Europe, before heading for England.

The couple had typically uploaded videos to social media every week or so. But their 60th, and final, video was about two months ago – with the silence prompting concerns from fans.

“You guys OK? It’s been a while,” one follower wrote.

Ms King is a dual Australian-British citizen and the British government has demanded the couple’s release.

Another British-Australian woman is also being held in Iran. She is an academic who had been lecturing at an Australian university and has been given a 10-year sentence.

The charges against her remain unclear, but the Times of London reports that 10-year terms are routinely given in Iran for spying charges.

On Thursday, Prime Minister Scott Morrison said Department of Foreign Affairs officials had been involved in the cases for “some time” and their work would continue.

He said the government would continue to carefully pursue the “very sensitive” cases.

“They’re never issues that are addressed well by offering public commentary on them,” he said.

“I note that in at least one of these cases, that’s a view that has been expressed by family members.”

Ms King’s and Mr Firkin’s families released a statement through DFAT on Thursday, saying they hoped to see the couple again as soon as possible.

“We have no further comment to make at this stage and ask that the media respects our privacy at this difficult time,” they said.

New video up now on YouTube of our first stretch of the Karakoram Highway. . In the pic is Passu Galcier. (Although the valley behind Jolie was cut by the glacier it’s actually behind us. Due to low cloud and rain the scenery was much more dramatic this way!). . Pakistan has more glaciers than almost anywhere in the world outside the polar regions. Although warming temperatures are having a significant affect on most, in the higher and more cold regions of the Karakoram the glaciers are considered stable and some even expanding. One is even known to be ‘surging’ and threatening villages. This pattern which goes against global trends is known as the ‘Karakoram Anomaly’. . Anyway, fun facts aside – the scenery here is massive and dramatic, and you can check out us starting to explore the region through the link on our profile. The actual glacier will be up in the next episode so stay tuned. 🏔🚐🇵🇰 . . . . . . . . . . #pakistan #karakoram #overland #vanlife #roadtrip #expedition #vlog #wildernessculture #trek #nature #youtube #thekarakoramclub #wildernessnation #blog #cnntravel #mountain #bbctravel #hike #travellingthroughtheworld #projectvanlife #hunza #passu #passuglacier #overlandjournal #glacier #camperlifestyle #expeditionportal #iamtb #gilgit

Drone use with a permit is allowed in Iran, but there are strict conditions.

People must not fly drones over people or large crowds, over the city of Tehran, or over sensitive areas.

Flying a drone without a permit in Iran is punishable by six months in prison followed by immediate deportation.

DFAT has refused to comment further on any of the detained Australians.

“Due to our privacy obligations, we will not comment further,” a spokesman for the Department of Foreign Affairs and Trade said.

“All Australian citizens and holders of dual nationality with Australia who are travelling to or through Iran are urged to follow the travel advice on the DFAT Smart Traveller website.”

As we walked around the beautiful city of Jodhpur this lovely gentleman approached me for a chat. He was a pleasant change from the millions of selfies I’ve been asked to be in, as he instead asked me to take a photo of him with my camera, then gave me his postal address and asked if I could please post him a copy when I can. . We’ve just uploaded the episode of our time here if you want to check it out! 📺 Link is in my bio! . . . . . #overland #travel #expedition #india #rajasthan #rajasthani #rajasthan_tourism #india_everyday #vlog #vlogger #blogger

The notorious Evin prison is where Iran holds its political prisoners and has a reputation for being the scene of various human rights abuses, including summary executions.

Australia’s official travel advice for Iran is set to “reconsider your need to travel”.

The highest warning level – “do not travel” – applies in some parts of the country.

There is a risk that foreigners, including Australians, could be arbitrarily detained or arrested.

The advice states Australians may be at greater risk if they have a profile that can be seen adversely by Iran, or undertake activities which could attract the attention of its authorities.