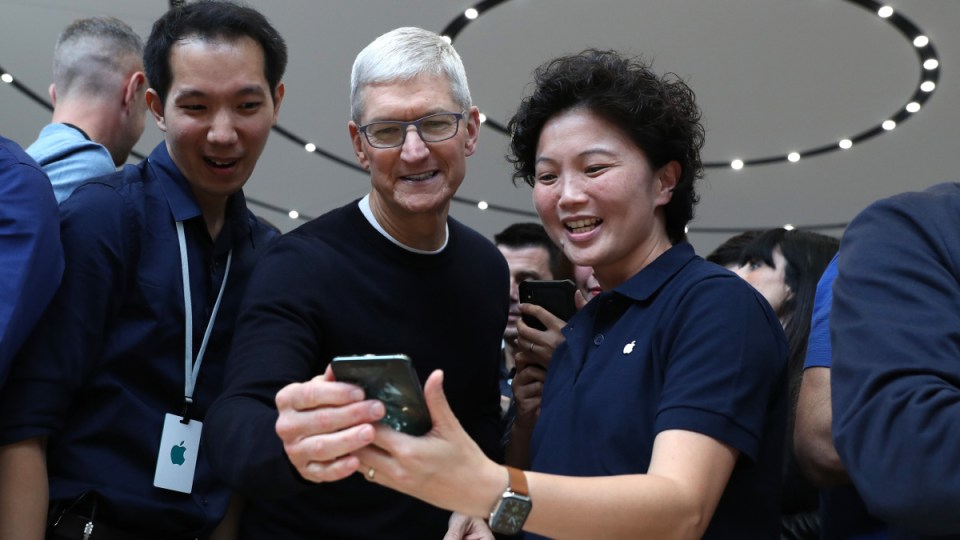 Apple will take on Netflix and Amazon with its own streaming service as declining phone sales shift the company’s attention to entertainment.

The tech giant has suffered a faster loss in phone sales than its rivals, with smartphone shipments falling 14 per cent year-on-year.

CEO Tim Cook announced Apple TV+ will kick off on November 1 as the company moves to strengthen its focus on services.

In good news for Apple fans, customers who purchased an iPhone, iPad, Apple TV, iPod touch or Mac would get the first year of the service for free.

It comes as the launch of the iPhone 11 overnight Tuesday failed to garner the excitement of old.

The new iPhone 11 features two cameras on the back, one of which has an ultra-wide lense for those landscape shots popular with the Instagram crowd.

Appealing to the selfie-obsessed phone user, it also boasts a ‘night mode’ for better photos in low light.

The luxury Apple 11 Pro model takes the next step with three cameras.

Another key feature of the iPhone 11 is its next generation of microchips, the A13, offering faster speeds.

Apple’s general revenues managed a slight 1 per cent increase to $77 billion ($US53 billion), largely off the back of growth in entertainment services such as iTunes and wearables like the Apple watch.

As the tech giant moves to strengthen its focus on services, its new streaming TV service will kick off on November 1 in about 100 countries and cost $7.27 a month ($US4.99).

Netflix starts at about $10 a month in Australia while Amazon Prime kicks in at about $7 a month.

Apple is in a “holding pattern” until it rolls out 5G phones with faster mobile data speeds next year, analysts said.

Instead, services like the television content, featuring the likes of Oprah Winfrey, that will compete with Netflix and Walt Disney could take centre stage.

The new strategy comes as iPhone sales have declined year-over-year for the past two fiscal quarters and investors are fixed on the growth potential for services.

Before and after getting the new iPhone 11 pro max 🤔#AppleEventpic.twitter.com/tJUsZzIBWz

Apple also announced its video game service, Apple Arcade, will be a tab in the App Store and available starting September 19 and cost $US4.99 ($A7.27) a month, with a one-month free trial.

Apple also unveiled updates to the Apple Watch and iPad.

Apple unveils its rival to Netflix as phone sales plunge