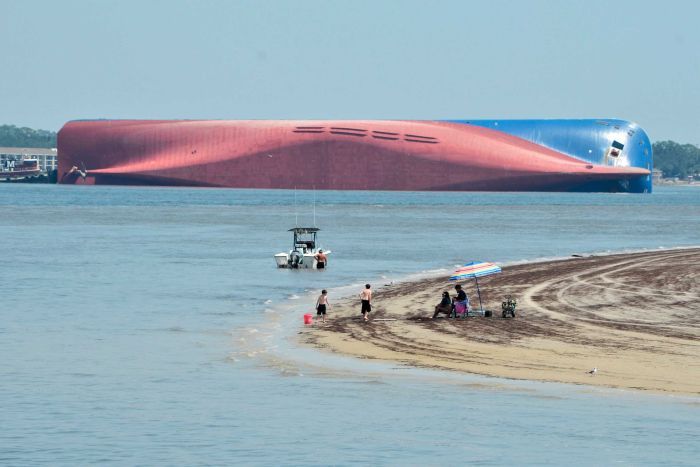 South Korean crew members have been rescued from the hull of a capsized cargo ship. Photo: AAP

All four missing crew members have been rescued from a South Korean cargo vessel that flipped on its side off the US east coast, after rescuers cut a hole in the vessel’s hull.

The fourth crew member was in a more complicated location inside the ship, US Coast Guard Captain John Reed told a livestreamed news conference, but had been retrieved safely.

The fourth crew member was stuck behind a glass enclosure in the ship’s engineering room, a deck away from the other three.

“Their condition is relatively good for having spent 34 or 35 hours in the conditions they’re in,” Captain Reed said.

The 200-metre Golden Ray got stuck in the shipping channel in St Simons Sound, near Brunswick, Georgia on Sunday. It capsized less than half an hour after leaving the dock in Brunswick, blocking one of the US’s busiest ports for shipping vehicles.

On Monday, rescuers landed on the side of the stricken 200-metre Golden Ray and rappelled down the hull.

They drilled a hole to communicate and found the crew members were “on board and OK”, Lieutenant Heflin said.

Rescuers then set up a tent on the hull and began cutting through the steel to extract the men.

.@USCG Capt. John Reed, the incident commander who was personally on scene, had this to say after the final #GoldenRay crew member was rescued. #HappeningNow #BREAKING pic.twitter.com/1MhSCVjPsD

The Coast Guard had already rescued 20 crew members by helicopter in the hours immediately after the ship capsized on Sunday, before smoke and flames made it too risky to venture further inside.

Rescuers were also concerned about the stability of the Golden Ray, which was carrying 4000 vehicles. It was feared some of them might have broken loose.

South Korea’s foreign ministry said in a statement that 10 South Koreans and 13 Filipinos had been on board the Golden Ray, along with a US harbour pilot, when the ship began tilting.

The Associated Press reports the Golden Ray is owned Hyundai Glovis, which carries cars for automakers Hyundai and Kia as well as others. It was built in 2017 and was sailing under the flag of the Marshall Islands.