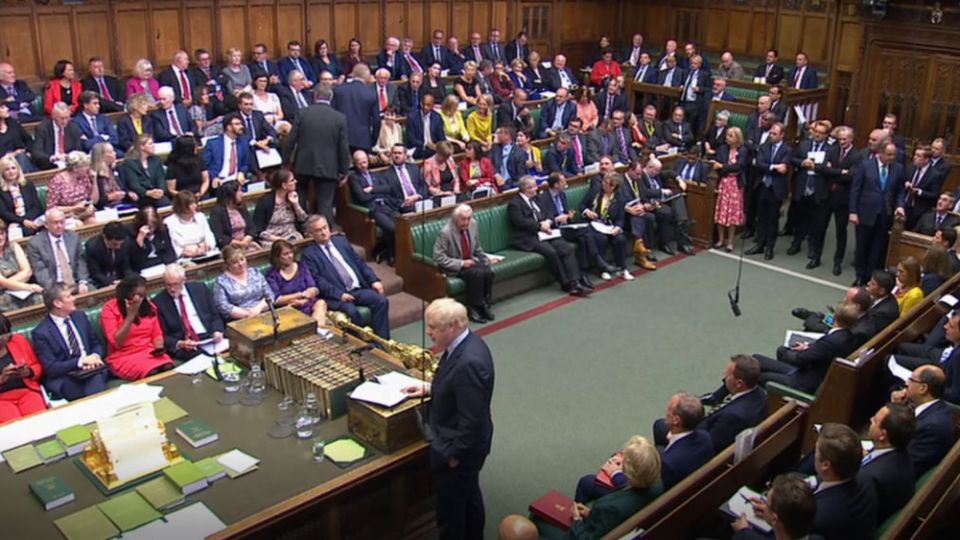 Brexit rebels have seized control of parliament in a showdown between Boris Johnson and opponents of his rushed plan to leave the European Union.

There was cheering and jeering as an alliance of opposition MPs and Conservative rebels won a 328-301 vote to take control of parliamentary business in a bid to delay Brexit.

The Prime Minister’s major defeat comes as he also lost his working majority with the sensational defection of Conservative MP Dr Phillip Lee who crossed the floor to join the Liberal Democrats.

Downing Street confirmed that the Tory rebels – including former chancellors Ken Clarke and Philip Hammond – would lose the Conservative whip as a result of their actions.

Withdrawing the whip means that an MP or Lord is effectively expelled from their party, but hangs onto their seat.

Speaking in the Chamber immediately after the shock vote, Mr Johnson threatened to call an early election.

“If MPs vote tomorrow to compel another pointless delay to Brexit then that would be the only way to resolve this,” he said.

Voting with ⁦@joswinson⁩ and ⁦@timfarron⁩ just now in the ⁦@HouseofCommons⁩ to take over the Commons business tomorrow to pass a Bill to stop a ‘no deal’ Brexit – which for us is the first step to #StopBrexit altogether! pic.twitter.com/sUIdbAV3WN

The latest turmoil unfolded on Parliament’s first day back from its summer break, with an alliance of opposition MPs and a significant number of Conservative rebels launching their counter-offensive.

They cleared the first hurdle after Speaker John Bercow granted an emergency debate on Brexit which was followed by a vote.

The successful vote enables opponents of a no-deal Brexit to introduce a bill on Wednesday (local time) to delay the Prime Minister’s October 31 Brexit deadline.

The rebels believe they will have enough votes to pass the bill and extend the deadline.

Scott Morrison invoked an unusual analogy while describing the mess  over Brexit.

“He’s got a bagful of angry cats at the moment,” the Prime Minister told 3AW Radio on Wednesday.

Mr Johnson reacted to the vote outcome, warning there would be “no doubt of the consequences”.

“Parliament is on the brink of wrecking any deal we might reach with Brussels.

“This will mean more dither and more delay.”

The latest twist in the Brexit saga comes after Mr Johnson last week attempted to block moves to delay Brexit when he requested the Queen suspend parliament early, limiting debate which angered the opposition and aggravated members on his own side.

Releasing his resignation letter on Twitter, Dr Lee said he wanted to stand and be counted and described his concern at what had become of “this once great party”.

He said the Brexit process had transformed the Conservative party “in to something more akin to a narrow faction where an individual’s ‘conservatism’ is measured by how recklessly one wishes to leave the European Union.

“Perhaps more disappointingly, it has increasingly become infected with the twin diseases of populism and English nationalism.”

After a great deal of thought, I have reached the conclusion that it is no longer possible to serve my constituents’ and country’s best interests as a Conservative Member of Parliament. My letter to the Prime Minister: pic.twitter.com/0QreSbSdwR

The British Sterling responded to the turmoil in parliament by flirting  briefly with some of its lowest levels since 1985.

Earlier Mr Johnson said in parliament he would follow legislation to delay Brexit if it was passed but cast the challenge as an attempt to force Britain to surrender to the EU.

“It means running up the white flag,” Mr Johnson said.

“It is a bill that, if passed, would force me to go to Brussels and beg an extension.

“It would force me to accept the terms offered. It would destroy any chance of negotiation for a new deal.”

Labour Party leader Jeremy Corbyn told parliament Mr Johnson’s was a government with “no mandate, no morals and, as of today, no majority”.

In the eye of the Brexit maelstrom, it was unclear if opposition parties would support any move to call an election, which requires the support of two-thirds of the 650-seat House of Commons.

“If an election is called, I am absolutely ready to fight it,” Mr Corbyn said after a meeting with leaders of other opposition parties.

Fears of an abrupt ‘no-deal’ Brexit were rising elsewhere.

The European Commission said such a scenario was a “very distinct possibility” and French Foreign Minister Jean-Yves Le Drian said it was the most likely scenario.

The UN trade agency UNCTAD said it would cost Britain at least $US16 billion ($24 billion) in lost exports to the EU, plus a further substantial sum in indirect costs.