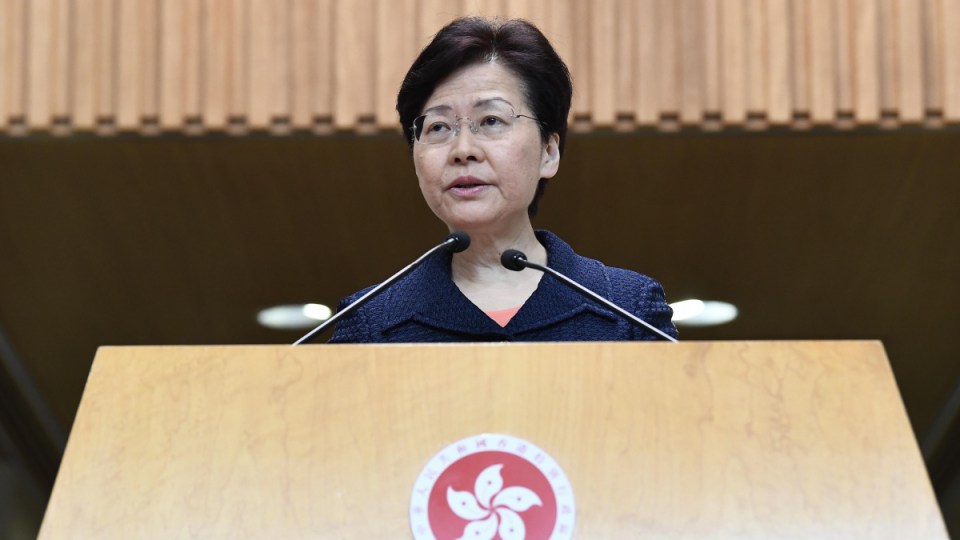 The Financial Times is reporting that China is planning to replace Hong Kong's leader Carrie Lam with an "interim" chief executive by March. Photo: Getty

Hong Kong leader Carrie Lam says she has never asked the Chinese government to let her resign to end the city’s political crisis, responding to a Reuters report about a voice recording of her saying she would step down if she could.

“I have never tendered any resignation,” Lam said at a televised news conference, adding that she was very disappointed details of a private meeting were leaked.

Lam said it was down to her whether to stay on in her position, adding she believed her Hong Kong government could solve the crisis.

Hundreds of thousands of people have taken to the streets since mid-June in protests at a now-suspended extradition bill which would see people sent to mainland China for trial in Communist Party controlled courts.

The protesters call for greater democracy are a direct challenge to Beijing, which has accused foreign powers, particularly the United States and Britain, of fomenting the unrest.

Earlier, it was reported that she would quit if she had a choice, according to an audio recording of remarks she made last week to a group of businesspeople.

The report, citing audio from a closed-door meeting, said Lam told the group that she now has “very limited” room to resolve the crisis because the unrest has become a national security and sovereignty issue for China.

Meanwhile. Hong Kong school and university students are due to boycott classes and hold pro-democracy rallies for the second straight day, further fuelling the crisis in the Chinese-ruled city.

Thousands of students joined demonstrations at universities on Monday, many wearing gas masks, joining hands to form human chains and chanting for Hong Kong to be given greater autonomy from the central Chinese government.

The runaway rebellion in Hong Kong is piling pressure on its embattled leader Carrie Lam, who was due to hold a media conference on Tuesday morning.

Reuters exclusively reported on Tuesday that Lam told business leaders last week that she had caused “unforgivable havoc” by igniting the political crisis by introducing a now-suspended extradition bill which would see people sent to mainland China for trial in Communist Party controlled courts.

Lam said she would quit if she had a choice, according to a leaked audio recording. A spokesman for Lam said her office would not comment on private meetings.

Hundreds of thousands of people have taken to the streets in protests since mid-June in a direct challenge to Beijing, which has accused foreign powers, particularly the United States and Britain, of fomenting the unrest.

China has not ruled out using force against the protests, and is eager to quell the unrest before the 70th anniversary of the founding of the People’s Republic of China on October 1.

A spokesman for China’s Hong Kong and Macau Affairs Office is due to speak to the media about the situation in Hong Kong at 3pm (5pm AEST).

Tensions are running high, with several brief skirmishes around the territory after night fell on Monday. Police fired tear gas to clear protesters in the densely populated Mongkok region of the Kowloon peninsula.

This followed a weekend marred by some of the worst violence since unrest escalated more than three months ago, with protesters burning barricades and throwing petrol bombs, and police retaliating with water cannon, tear gas and batons.

Protesters are seeking greater democracy in the former British colony which returned to China in 1997 under a “one country, two systems” formula that guarantees wide-ranging autonomy, including an independent judiciary. Many in the city fear Beijing has been eroding those freedoms.

Hong Kong, an Asian financial hub and major trading port, is facing its first recession in a decade as a result of the protests, which have severely hit tourism in the city and undermined investor confidence.

-with Jessie Pang and Joyce Zhou