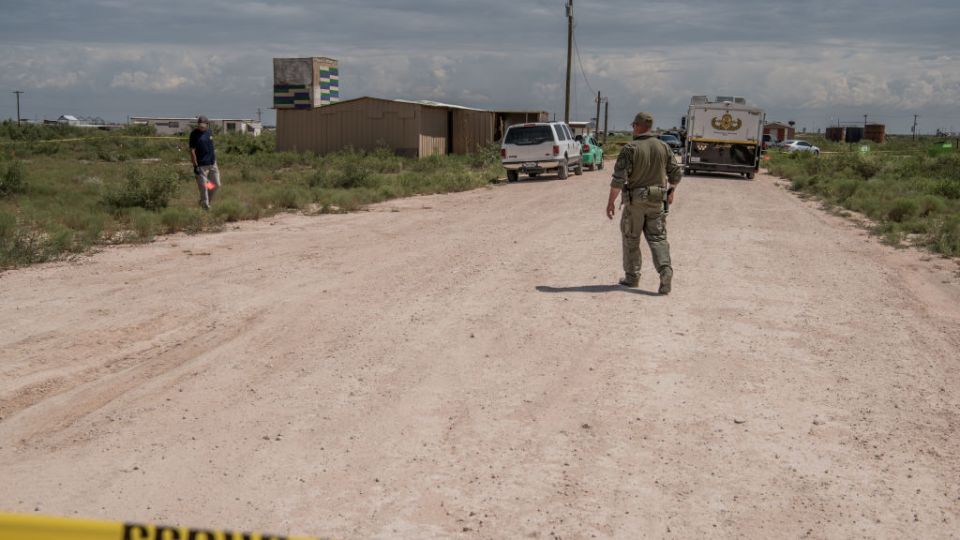 FBI agents search a home believed to be linked to the Texas shooting suspect. Photo: Getty

A gunman who went on the rampage in Texas killed seven people and wounded 22 others, including a toddler who was shot in the face, before he was killed by police.

Police said the second mass shooting in Texas in four weeks began on Saturday afternoon with a routine traffic stop.

It ended when the suspect, a white male in his 30s, was cornered by officers in the parking lot of a cinema complex.

Police, motorists and shoppers were all caught up in the chaos that unfolded between the cities of Odessa and Midland during a busy Labor Day holiday weekend.

Authorities have said the shooter was known to police and lived locally.

They said the investigation continues, but there was no apparent link to domestic or international terrorism.

“There are no definitive answers as to motive or reasons at this point, but we are fairly certain that the subject did act alone,” Odessa Police Chief Michael Gerke said at a news conference.

Mr Gerke said seven victims were killed and 22 wounded, and he offered his condolences to their families.

“My heart aches for them all,” he said.

Among the wounded was a 17-month-old girl, Anderson Davis, who was shot in the face, according to officials and an online fundraising campaign started by her family.

Three police officers were shot and wounded and were in stable condition.

In a statement on Facebook, Odessa police named the gunman as Seth Aaron Ator, 36, of Odessa.

A mass shooting in West Texas has left 7 people dead and injured 22 — here's what is known so far pic.twitter.com/BickVFPcOT

On August 3, a gunman killed 22 people in another Saturday shooting at a Walmart store about 410km west of Midland in the city of El Paso, Texas.

US President Donald Trump called the Odessa-Midland shooter “a very sick person” but said background checks on gun buyers would not have prevented recent US gun violence.

In remarks to reporters on Sunday, Mr Trump said he would be working with Democrats and Republicans on gun legislation when Congress returns this month.

“I think you’re going to see some interesting things coming along,” he said.

A postal worker whose vehicle was hijacked. A former math teacher whom students adored. A 15-year-old who celebrated her quinceañera just a few months ago. A 25-year-old gunned down outside his home.

The bloodshed between Midland and Odessa began when two state troopers pulled over a car on Interstate 20 for not using its turn signal and the lone occupant fired at their patrol vehicle with a lightweight semi-automatic, wounding one of them.

After fleeing, the suspect hijacked a postal van and opened fire on passersby before he was shot dead outside the Cinergy cinema complex in Odessa, police said.