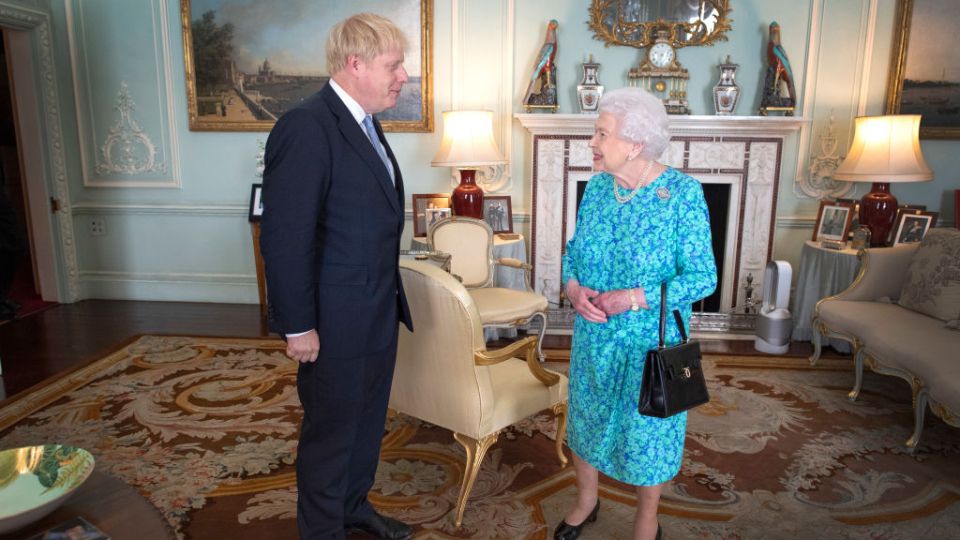 Queen Elizabeth II, pictured with UK prime minister when he was newly elected as Conservative leader, has agreed to his request to suspend parliament early. Photo: Getty

Incensed opposition MPs have written to the 93-year-old monarch expressing their concern and asking for a meeting, urging her to intervene.

It comes after the Queen granted the new prime minister’s request to suspend parliament for a month from mid-September which would derail any plans to block a no-deal Brexit before the October 31 deadline to leave the European Union.

In his boldest move yet to exit the EU – with or without a divorce deal – Mr Johnson set October 14 for the Queen’s Speech, the formal state opening of a new session of parliament that is preceded by a suspension of the House of Commons.

This slashes the amount of time parliament will sit between now and the EU exit day on October 31, infuriating opponents who have turned to Queen Elizabeth for help after she approved it.

With just 65 days until exit day, parliamentarians are battling to prevent the prime minister from steering the country out of the EU without a transition deal, with the majority of MPs against a no-deal exit.

Mr Johnson holds a majority of just one seat in the 650-seat parliament, meaning members of his party who oppose a no-deal Brexit will have to decide where their loyalties lie.

In theory the Queen has the power to block laws or pick a new government but she rarely intervenes in politics.

Outrage was swift against Mr Johnson’s stealth move to limit opposition to Brexit just weeks before the deadline, with protesters also taking to the streets denouncing the so-called “coup”.

The audacious plan has been denounced on both sides of politics as “unconstitutional” and “undemocratic”.

This isn't about left, right, centre, leave or remain… This is about ensuring that democracy can never be put on pause when an unelected politician finds it inconvenient.#StopTheCoup pic.twitter.com/j2tWtGRFNl

A petition opposing the suspension of parliament gained more than 450,000 signatures in a matter of hours after the shock announcement.

Fellow Conservatives such as Philip Hammond, a former finance minister, described it as profoundly undemocratic.

Parliament’s Speaker John Bercow, a powerful figure who has shown a willingness to break procedural precedents to ensure MPs can debate Brexit, said it was “blindingly obvious” the move was designed to restrict debate.

“Shutting down parliament would be an offence against the democratic process and the rights of parliamentarians as the people’s elected representatives,” Mr Bercow, who voted to remain in the EU in 2016, said in a statement.

John McDonnell, the second most powerful man in the opposition Labour Party, described it as a “coup”.

“Whatever one’s views on Brexit, once you allow a prime minister to prevent the full and free operation of our democratic institutions you are on a very precarious path.”

Shocked by the reckless move to suspend parliament to deliver an extreme Brexit for which there is no mandate. Taking a wrecking ball to the constitution by suspending parliament to avoid scrutiny, is no way to uphold democracy. I will work on a cross party basis to stop no deal

Mr Johnson argued, however, that the move was designed to allow his government to press on with its domestic agenda.

“There will be ample time in parliament for MPs to debate the EU, to debate Brexit and all the other issues, ample time,” Mr Johnson told reporters on Wednesday.

Asked if he was trying to block MPs from delaying Britain’s EU departure, he replied: “That is completely untrue.”

The decision to limit parliamentary scrutiny has increased the chances Mr Johnson could face a vote of no-confidence in parliament, potentially leading to an election.

On Tuesday, the leaders of Britain’s opposition parties had agreed to seek to use parliamentary procedure to force Mr Johnson to ask Brussels for a delay to Brexit beyond October 31.

But with the prime minister finally showing his hand, they may try to bring him down instead.

Labor leader Jeremy Corbyn said he would seek to use parliamentary mechanisms and then call a no-confidence vote when the time was right.

“Suspending Parliament is not acceptable, it is not on. What the prime minister is doing is a smash and grab on our democracy to force through a no deal,” he said.

Outrage at Boris Johnson ‘coup’, with calls for Queen to intervene