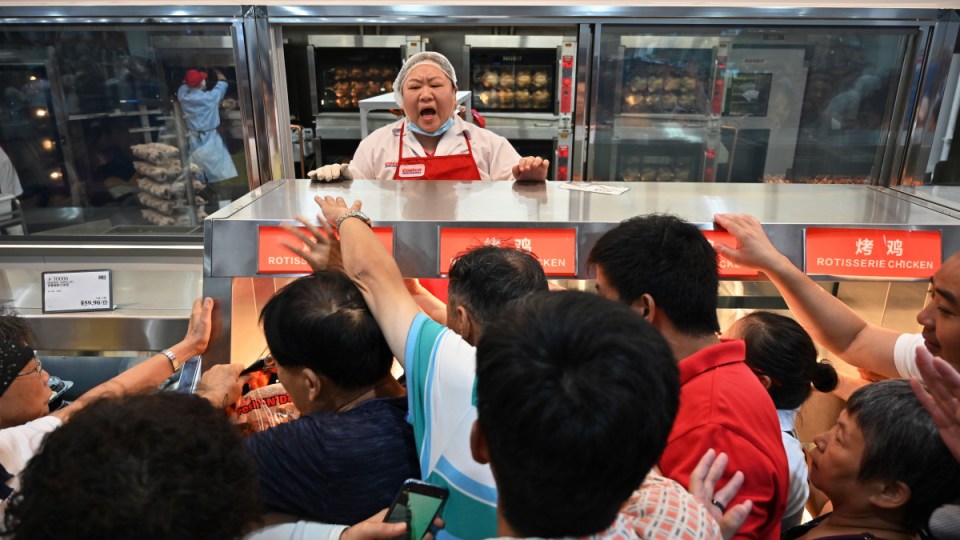 Customers try to get a roast chicken in the frenzied first hours of Costco's new Shanghai outlet. Photo: Getty

Costco opened its first outlet in China on Tuesday, only to be so overwhelmed with shoppers that it had to shut the doors within hours.

Videos posted on Chinese media show thousands of people crowding the aisles of the outlet, while signs outside warned incoming shoppers they would have to wait three hours to even get a car park.

One nearby school sent out an advisory to parents warning them about the traffic conditions. “Please expect the student dismissal this afternoon to be severely delayed due to the grand opening of Costco Supermarket,” it said.

Shoppers also had to wait in half-hour queues to checkout, according to Chinese blog Shanghaiist.

It said Costco members were sent text messages during the day urging them to avoid the shop at peak hours and then, by 2pm, not to come at all.

The shop shut in the afternoon after official warnings about the traffic it was generating.

“Because there is a high concentration of people around the newly opened supermarket, for the safety of the public we recommend that residents consume in a reasonable manner,” state-run media outlet The Paper quoted Shanghai government officials saying in an official notice.

The US big-box retailer is the latest overseas chain to try its luck in China’s fast-growing consumer market. The Costco opening came less than a week after US President Donald Trump ordered American businesses to “immediately start looking for an alternative to China” as the trade war between the two nations intensified.

….better off without them. The vast amounts of money made and stolen by China from the United States, year after year, for decades, will and must STOP. Our great American companies are hereby ordered to immediately start looking for an alternative to China, including bringing..

But the new shop was definitely a winner with Shanghai consumers. There was a long queue outside early on Tuesday morning, and – once the doors opened – some parts of the outlet were quickly so full they were impossible to get into immediately.

Today, Costco wholesale opened its first store in China. Shoppers in Shanghai had to wait 3 hours for a parking spot… pic.twitter.com/Z4uKpDXb54

Costco’s own-brand baked goods, such as muffins, were among the most popular items.

“There are discounts as the business is opening now. Meat is cheap here,” Rick Zhou, 31, who drove for more than an hour to the Shanghai shop, told the Financial Times.

“Milk powder is very cheap and meat is cheaper than the average supermarket,” said a 60-year-old man Mr Wang, who spent $251 at the store, adding: “New Zealand apples are also well-priced.”